Colton Berrett: Another Teen Sacrificed by the HPV Vaccine, Has Died

Melissa Curtin January 8, 2018 January 9, 2018Vaccine Injury, Vaccine Reaction, VAXXED
Thanks for subscribing! You can unsubscribe at any time.
Share with your friends...

Colton Berrett: Another Teen Sacrificed by the HPV Vaccine, Has Died

(Colton Berrett, 17 – March 13, 2000 – January 5, 2018)
Deep tidal waves of sadness and devastation shook a community of parents, caregivers, family and friends of vaccine injured and deceased children to its core — after learning about the death of Colton Berrett on January 5th, 2018, in Utah. Heartbreaking, heart-shattering, devastating, horrific, crushing – and most importantly, unnecessary. Another tragic death of a child damaged by and caused from vaccines, and in this case, it was the Gardasil/Human Papilloma Virus Vaccine (HPV) that took his life. Colton is one of thousands of severely vaccine injured children who ultimately lost his life and succumbed to the toxic travesty of vaccine injury and damage. He courageously battled for his survival. May he rest in peace and his story be shared widely. May his family be surrounded by love, community, and find peace in their hearts through this difficult time.

Colton was a vibrant, healthy, lively, intelligent, happy, positive, athletic, thrill-seeking boy with unbridled potential and a bright future. Only his future and life was robbed not just from him, but also from his loving family, his mother, father, and two siblings, from everyone that met him, and the larger community and world that will never have the opportunity to meet this adventurous, courageous, young man.

Colton, like many boys and girls his age, enjoyed an active sports filled life. He played baseball, participated in indoor skydiving, motor-cross, motorcycling, snow skiing, and more. He thrived on his active lifestyle and excelled athletically. He was in great health and described as an upbeat, amazing teen.

A medical physical was required for Colton to attend a scout camp. This was prior to his 8th grade school year. His pediatrician and long-time family doctor recommended the HPV Vaccine to his mother, Kathleen. His doctor claimed the HPV Vaccine could help prevent cancer, and even if Colton was not promiscuous, he could give the virus to his future wife. Like many parents, Kathleen trusted her doctor. She confidently shared, “The doctor is the one who went to school, and of course you’re going to do what he recommends.”

Colton was administered the third round of the Gardasil/ HPV Vaccine on February 1, 2014, about a month and a half just shy of his 14th birthday. About two weeks after, he experienced a painful neck ache following the vaccine and was given Tylenol to alleviate the pain. Adventurous by nature, the next day, Colton and his dad went motor-cross riding to use Colton’s new bike. That day when he arrived home, he became pale, started to feel nauseous, and was not well that evening – he headed to bed. Kathleen continued to check on him throughout the night and Colton expressed he could not use his right arm. Intuitively, Kathleen worried if he had spinal meningitis and if her son was going paralyzed. A mother’s or any concerned parent’s nightmare.

Colton’s dad brought Colton to urgent care at Primary Children’s Hospital in Salt Lake City the next morning, on Monday, February 17, 2014. Colton was almost completely paralyzed and that was the beginning of his 88 day hospital stay. Doctors and staff discovered through speaking with Colton’s parents that he was healthy, active, and not sick, until he received the HPV Vaccine two weeks earlier and experienced the neck ache. It was agreed that Colton suffered a severe adverse reaction and vaccine injury to the Gardasil vaccine. The doctors reported his vaccine injury to the Vaccine Adverse Event Reporting System (VAERS). 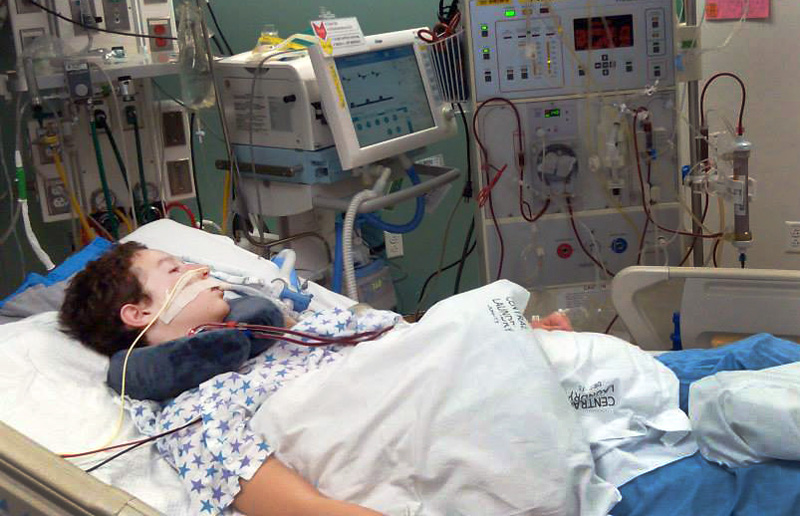 (Their family doctor no longer offers the HPV Vaccine to boys and is cautious when suggesting the vaccine to girls in his practice.)

Colton was originally diagnosed with Acute Longitudinal Transverse Myelitis; C1 through T-12 were affected (Cervical-1, through Thoracic-12). The inflammation in his spinal cord caused the paralysis which started in his neck and full right arm. His left arm was starting to lose function and become paralyzed. Colton was also having difficulty breathing, so intubation and a ventilator were needed. Paralysis continued spreading throughout his body and it was not too long before Colton lost his speech ability. Able only to communicate using the “thumbs up or thumbs down” method, that was soon halted due to loss of movement in his thumbs. Colton’s new reality included daily therapy to avoid infection and pneumonia, irregular temperature regulation, hot/cold packs for the spikes and drops in temperature, being uncomfortable with a cervical collar, and all this with a 15 pound ventilator/breathing machine. His family referred to this as his “ball and chain.” 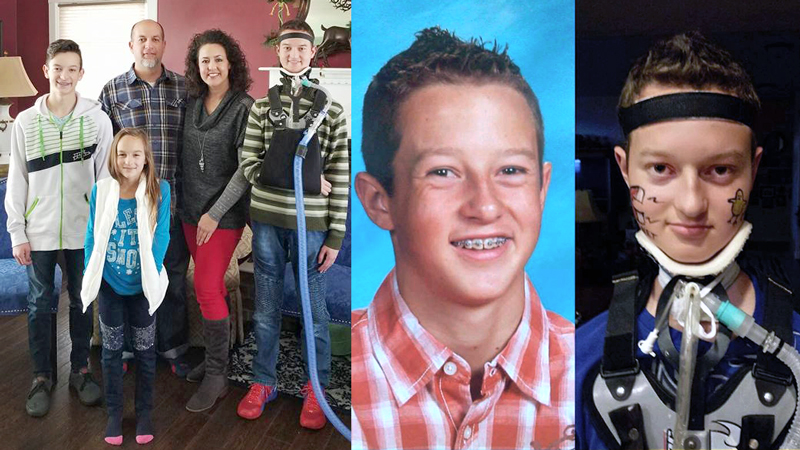 Colton was a quadriplegic for a month and a half. His mother traveled with him 100 miles roundtrip a day after-school, three to four days a week for a year and a half, for therapy to encourage his legs to function and strengthen. With this ambitious, effective therapy routine, and Colton’s and his family’s commitment to his physical improvement, he recovered his ability to speak, and some of his mobility function, except he never regained full function of his lungs, neck, or right arm. Colton, as he was physically able, continued his active lifestyle, but with much limitation. His parents bought him a recumbent bicycle and had it adapted and fit for him. He was as active and involved with sports as he physically could handle. His willingness to be a positive force and bright light through his physical pain, struggles, and setbacks, is profoundly inspirational. Kathleen Berrett’s wisdom, “Whatever your ailment is in life, our saying is, keep on keeping on.” 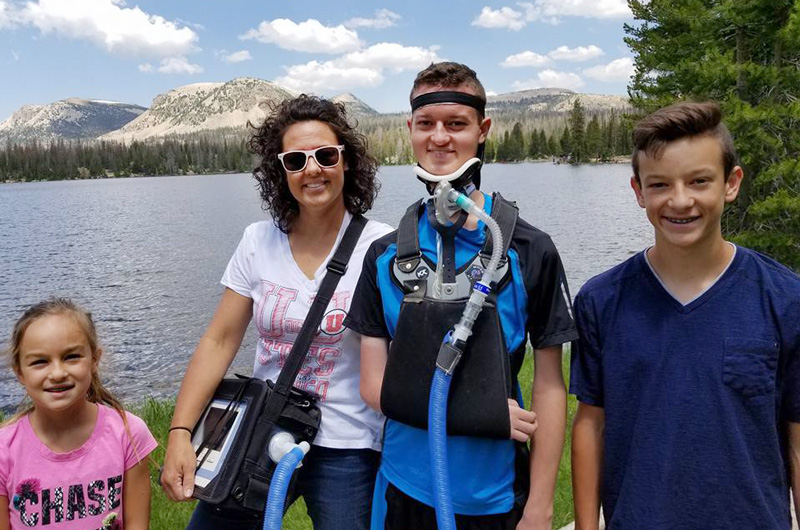 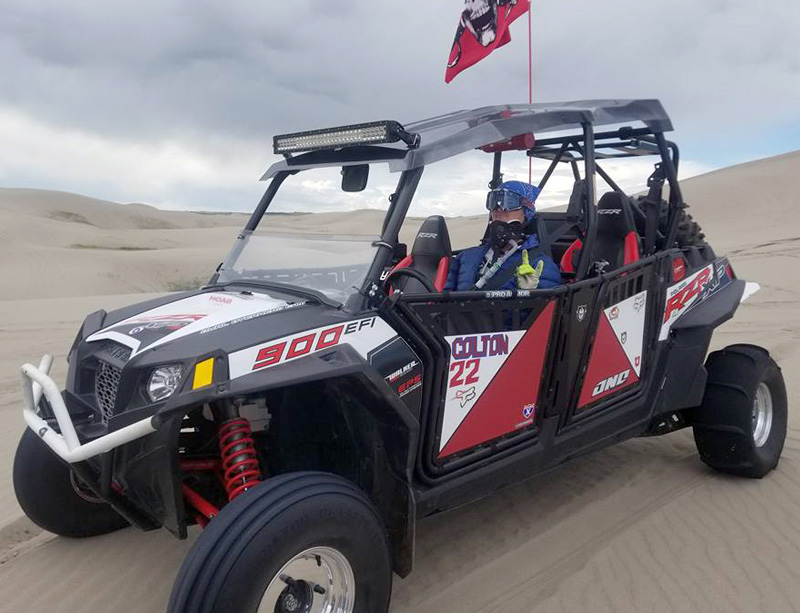 How many more innocent children must die because of profit and slick public relations? Using “cancer” scare tactics through a fear-based marketing campaign for a product whose clinical trials and studies indicate more adverse reactions and negative issues than are reported or widely known. The connection between HPV and cancer is still under debate. People are able to have HPV without ever developing cancer.  HPV has not been proven to be a causal agent of any kind of cancer. www.ncbi.nlm.nih.gov/pmc/articles/PMC2246698/

From the Center for Disease Control’s own website: “Most HPV infections are transient and asymptomatic, causing no symptoms. More than 90% of new HPV infections, including those caused by high-risk HPV types, clear or become undetectable within 2 years, and clearance usually occurs in the first 6 months after infection.” www.cdc.gov/vaccines/pubs/surv-manual/chpt05-hpv.html

Are you aware the Gardasil/HPV Vaccine was fast-tracked and brought to market in only 6 months? http://journals.sagepub.com/doi/10.1111/j.1748-720X.2012.00698.x  Slate recently published an article, “What the Gardasil Testing May Have Missed,” that is worth the read: www.slate.com/health-and-science/2017/12/flaws-in-the-clinical-trials-for-gardasil-made-it-harder-to-properly-assess-safety.html

Across France, India, and Japan, they have either prohibited the Gardasil vaccine and/or filed criminal lawsuits! Why is the U.S. continuing to inject children as young as nine with this poison given what is known about the horrific side effects, adverse reactions, and all the reported vaccine injuries and death worldwide? Do we value multi-billion dollar corporations more than we value our children, their health, and their future? Let’s not forget that due to the historic National Childhood Vaccine Injury Act of 1986, vaccine manufacturers have zero liability and full immunity from the injuries, damage, and deaths that occur from their products. The U.S. Vaccine Injury Compensation Fund (VICF) was set up as a result of the 1986 law and almost 4 billion dollars have been paid out to select families that fought for years in court and proved their children were directly injured and/or died as a result of their toxic vaccines. Are you outraged yet? These unnecessary deaths and damage to children needs to stop.

May Colton’s heartbreaking story and life inspire parents to continue their research, become more informed and educated about vaccines, especially the Gardasil/HPV Vaccine. May this story encourage those within the medical profession to re-examine their push for this vaccine, and their abundantly lined pockets, by reflecting on the lives lost, and the damages and injuries to healthy children that result from this atrocious, dangerous vaccine.

Vaccine activist Brittney Kara shares her thoughts about Colton in her video on Facebook:

“What an amazing young man – I’m just so tired of seeing these kids die [from vaccines].”

And Polly from Vaxxed has this to say about Colton…

One activist had this to say about Colton’s tragic passing.

In the video below, at the 1 hour and 11 minute mark, they discuss Colton and read a statement from his mom.

Read our story about Chloe, severely injured by the HPV vaccine and hanging onto life by a thread (she has deteriorated greatly since we ran that story).

For more stories on the daily struggles of vaccine injury, visit: www.stopmandatoryvaccination.com/vaccine-dangers/vaccine-injury-is-a-daily-struggle/