The Myth: Vaccines provide “herd immunity” and are for the greater good of the society.

The Truth: Herd immunity through vaccination does not exist. The theory behind herd immunity is that if a given percentage of individuals (usually between 85-96%) are vaccinated, the community is fully immune from outbreaks and the immunized protect those who cannot be immunized. However, many outbreaks have occurred within populations that have been fully immunized, and some research points to the vaccination program as the instigator of outbreaks.

Supporting statistics for this phenomenon include:

During the measles outbreaks above, it’s important to note that there were a surprisingly low number of measles cases in the unvaccinated population.

Many studies reveal that clusters of children have gotten measles and whooping cough despite vaccination. For example, according to the Ohio Department of Health, 50% the reported cases of whooping cough in Ohio from 1987 to 1991 were in vaccinated persons. The Journal of Pediatrics published a study in 1989 showing a 55% failure rate in the pertussis vaccine (Walene James, Immunization: The Reality Behind the Myth).

The solution so far to these obvious vaccine failures is to mandate more boosters. So the CDC has added multiple boosters to the schedule as they continue to blame outbreaks on the unvaccinated.

This type of thinking completely contradicts the whole premise behind vaccination. If the vaccine worked as purported, it shouldn’t matter if anyone else was vaccinated. If you were immune, it should not matter if you are around one unvaccinated person, or a million unvaccinated people.

If vaccines don’t provide herd immunity, what does?

Vaccines are said to work when they provoke antibodies but since they bypass the innate system of killer cells, the antibody response isn’t as strong as it would have been had the virus passed through the immune system in the proper way. This creates a secondary issue of “original antigenic sin” (OAS).

Since vaccines cannot replicate the virulence of a wild virus without causing the same disease process, the OAS from vaccination is muted. It completely bypasses the innate system and only involves the second level of defense, antibodies. So when a person encounters the virus in the future, it can only mount the same inadequate defense it originally created.

When disease outbreaks occur, officials first blame it on reduced “herd immunity” because of those who refuse to vaccinate despite the fact that most states meet the CDC’s targeted goal of 95% vaccination rate among children. The blame is better placed on the concept of ineffectively stimulating the immune response leaving those vaccinated vulnerable to disease while possessing an inadequate immune response.

This reality of inadequate protection among the vaccinated is shown in the numbers of vaccinated persons who succumb to the illness the vaccination was given to prevent. This is real-world evidence that vaccines do not impart the herd immunity, which can only come from the full response of the innate and humoral immune systems working together.

One “epidemic” that has not garnered much attention is the EV-D68 virus. In the fall of 2014, the CDC reported 1,153 people in 49 states developed a mysterious “polio-like” respiratory illness linked to 14 deaths and 115 cases of paralysis from acute flaccid myelitis. The EV-D68 enterovirus was the cause.

This outbreak was ten times greater than the December 2014 measles outbreak, plus it disabled many and was deadly. Yet government officials have not promoted general public awareness or panic-driven media coverage for enterovirus EV-D68. This is in stark contrast to recent “Disneyland Measles Epidemic” which made about 130 people moderately ill and caused no deaths yet was reported incessantly by media as a major health threat.

Thirty percent of those who got measles in Disneyland were vaccinated.

There is no specific vaccine for EV-D68, however most children are well vaccinated against polio. The majority of those who contracted the mysterious “polio-like” symptoms from EV-D68 enterovirus were children. EV-D68 was once a rare illness but it has had a remarkable increase in occurrence since it was discovered in 1962. Are highly vaccinated children more susceptible to EV-D68? This is unknown. What is known is that this major outbreak of a polio-like illness did not cause the same panic-laden reporting in major media outlets as the measles outbreak even though both illnesses were in highly vaccinated children.

For The Greater Good

Who decides how many deaths, disabilities, or injuries are a fair trade for the greater good?

The “greater good” public health argument has been used in the past with some devastating results. We would be wise to look at the ethical consequences of forced medical treatment (mandatory vaccination) in light of our history.

At the beginning twentieth century the “science of eugenics” introduced the notion that a society could and should improve itself by controlling its genetic composition through the elimination “undesirable” traits. These ideas were an outgrowth of Darwin’s theories of evolution combined with the successes in animal husbandry.

The intellectual elite embraced this science and its supporters included luminaries in politics, medicine, and academic institutions plus the likes of suffragette Margaret Sanger and the Carnegie Institution. Once fully established as science in the United States, these ideas spread across the Atlantic into Europe and were embraced specifically by Germany.

In 1922, the American Journal of Psychiatry published an article by Harold Gosline, MD, stating his belief that eugenics “will go far toward eradicating mental disease and defect and their related branches of poverty, crime and delinquency.” (Dissolving Illusions, pg151) The method for doing so was forced sterilization.

The idea was to protect society from these “manifestly unfit” individuals by not allowing them to reproduce. Medical boards were set up to determine who was unfit to reproduce. Race was also an issue and eugenic sterilizations were broadened to include “undesirable” immigrants.

States got on board and began passing “eugenic laws” for compulsory sterilization. These were enacted as a public health measure to protect society from “the dysgenic” (undesirable) members of society. Eventually all fifty states passed legislation for forced sterilization of “imbeciles, the feeble-mined (idiots, imbeciles, and morons), epileptics, delinquents, certain criminals, and defectives.” In many states, these laws remain on the books.

A 1926 ruling by the Supreme Court upheld the practice of forced sterilization in an 8 – 1 decision; they used compulsory vaccination as precedent to justify their decision. At the Nuremburg trials following World War II, Nazi physicians used eugenics laws in the United States as a defense for their experiments. Following the revelation of atrocities in Nazi Germany, eugenics theory lost some of its appeal. However forced sterilizations continued through the 1940s, 50s and 60s, and did not stop until the late 1970s.

In all, more than 60,000 people were forcibly sterilized, sometimes not only without their consent but even without their knowledge (as in the case of children in foster care or detention facilities). California led the way with over 20,000 forced sterilizations.

Not included in these totals are the large numbers of Native Americans sterilized in the Indian Health Services (IHS) program in the 1970s. Between twenty-five and fifty percent of Native Americans (mostly women) who received care from IHS (the only health care available to Native Americans at that time) were coerced into being sterilized or sterilized without consent or knowledge during another procedure, often related to childbirth. These forced sterilizations continued as late as 1976.

The argument of the “greater good” for eugenics was rejected at the Nuremburg trials following World War II and yet it continued in the United States for thirty more years. It was a specious argument throughout. The argument of the health for the “greater good” through compulsory medical procedures with known risks should be rejected now. Parents should always have the right to choose the risks they’re willing to submit their children to. 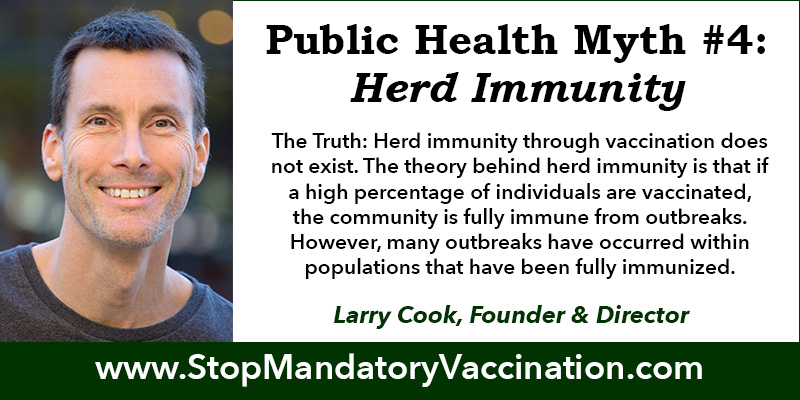