Vaxxed director Andrew Wakefield talks about the CDC’s own findings that the MMR vaccine causes autism, the cover-up of that information and why the documentary about this cover-up – Vaxxed: From Cover-Up To Catastrophe – took the world by storm. Vaxxed is one of the most censored documentaries about the dangers of vaccines and yet, that censorship about vaccination danger has actually caused more people to watch it, thereby increasing awareness about MMR vaccine autism risk. Vaxxed has dramatically increased awareness of vaccine injury and why vaccines are not safe. Andrew Wakefield discusses some tour highlights as well, including when a pediatrician in California went to a screening, even though he didn’t want to go, but after watching the movie he stood up in the audience and offered to write medical exemptions for any parent. Wakefield also discusses what happened at the Tribeca film festival and Robert De Niro and a lot more.

Vaxxed, yeah, From Cover-up to Catastrophe, was a game changer, really, in many ways. Why, because it was the first time, ever, in the history of this whole movement, certainly in the 25 years that I’ve been involved in it, that we had an insider, someone coming from the Centers for Disease Control and Prevention, a senior scientist, who was involved in designing vaccine safety studies, collecting the data, analyzing the data, writing the papers, coming forward and saying, “We have lied. “We have found an association, a causal association “between measles/mumps/rubella vaccine and Autism risk, “and we decided not only to cover that up but to destroy “the documents so that there would be no record “that we had ever found this effect in the first place.”

Dr. William Thompson, really it’s fascinating how one man can change the whole discussion, can throw the whole thing into confusion, and that’s exactly what he did, the first time ever in the history of the world. It really changed everything because they had no idea how to deal with this. They could ignore us, they could argue with us, they could simply blow us off, but they couldn’t do this with their own guy.

The value of Thompson, as a whistleblower, is that he kept everything. He kept all of the documents, he kept all of the analysis, all of the serial iterations of what they did, and why they did it, and why they changed it, and what they changed. He did this because he was never, as a whistleblower, as a witness, going to speculate. He was never going to say anything that he could not substantiate, could not support with contemporaneous documentation. That made him so valuable to us and so dangerous to the other side. While his colleagues believed that they had destroyed all of the offending documents, Thompson had kept everything and gave it to us.

On that basis, we were able to make Vaxxed. It now must be one of the most censored films, certainly one of the most censored documentaries in the history of the world. The thing about censorship is it has the opposite effect to what they’re trying to achieve. Everybody wants to watch it. Once you start trying to tell the people of the world what they’re gonna see, and think, and read, and write, and discuss, then they get angry, and they want to see this film. That’s exactly what’s happened, and it’s had a profound impact.

Just to kinda summarize the impact, and to quantify it. Every year there’s a poll, it’s called YouGov, Y-O-U-G-O-V, I think it’s out of the Ecoonmist, and it asks the question, “Do you believe vaccines cause autism?” Completely unrelated to our movie. In 2015, before the film came out, 13% of people said, “Probably,” or “Definitely.” One year later, after the film had been out, but before it had been on tour, and before Polly had done her bus tour twice around The United States of America and elsewhere, that number was 31%.

31% can win an election. 31% is huge, and I think that is why the reaction to Vaxxed was so vitriolic, so angry. People said, “This is all made up. “It’s just more lies from Dr. Wakefield.” Well, let me say this. We have accused these five scientists and their superiors at the CDC of what amounts to the worst medical fraud in the history of the world, one of the greatest humanitarian crimes of all time. Why? Because these doctors were sworn to protect the health and safety of American children. They did completely the opposite. If there had been one word of a lie, one word of that film that was false, we would’ve been sued to the moon and back again. There’s been not a whisper, not a single whisper. Why? Because they know it’s the truth, and they know that if they sued us for defamation, that would lead to more discovery, and discovery is not what they want.

The journey for Vaxxed started with meeting up with Del Bigtree at a fundraiser actually, and Del became the producer on the film. Then, Del introduced us to Cinema Libre Studios, a small independent distribution company. We’ve had a very good working relationship with them. It came to Tribeca Film Festival, we’d submitted the film to the festival. It was an official selection. We were absolutely delighted, and then it got pulled. I think, as soon as the commercial sponsors heard about the film, who had interest in the pharmaceutical industry, specifically, then it was killed. Those three days, after that, were misery, utter misery. That was the end of my film career right there.

Then, Robert De Niro, bless him, went on the Today show to talk about Tribeca, the upcoming film festival, with his partner, Jane Rosenthal. All he wanted to talk about was the film that didn’t play, that had been pulled, and saying that was a mistake, and everybody needs to see this film. He was furious, absolutely furious. It was quite clear that he was angry about it. From that moment on, it just exploded.

It exploded across America, social media went crazy. Since that time, we went on tour, it’s played, I guess now, probably in 800, 1000 North American cities. I’ve been all over Europe, to Germany, to Italy, to France, to Belgium. I’ve been back to Italy again. It’s been in Poland, on national television. Polly has been to Australia and new Zealand, and been banned from Australia for her troubles. It’s been absolutely fascinating.

It’s played in Canada, it’s playing everywhere. I think we just sold it to Japan and so on. Wherever you go, it gets censored. I mean, in Italy, we ended up playing in a yoga studio after being pulled in one theater. But, just people wanted to see it more and more and more. We’ve had some extraordinary Q&As, wonderful Q&As.

I remember in Italy, the most explosive Q&As. We were in Naples, this is typical Italy, and this big pediatrician got up at the back, this woman, saying, “It’s all better diagnosis. “We’re just good at what we do now and we weren’t before. Parents are just deluded and making it all up.” Suddenly, there was a complete riot. It was the end of the Q&A. I had to do nothing more, I just sat back. I had no idea what they were talking about. People screaming at each other, just typical.

The same in Berlin as well, we had a very similar situation in Berlin where I was ambushed by Channel 4 television from the UK. This woman came and screamed these questions at me. She had her question, but that was it. This is a parental Q&A, it’s not a press conference so you get your question and shut up. Anyway, she wouldn’t shut up so people were just standing, screaming at her. That was the end of that one, wonderful.

It’s provoked an intense reaction where the crowds have almost exclusively been very, very supportive. I think one of the most memorable moments was we had a screening in Santa Anna, it was absolutely packed, and there was a pediatrician who had been dragged kicking and screaming to this screening, didn’t want to see it, didn’t believe it, pro-vaccine, sitting on the front row to the right. At the end of the movie, he got up and he turned to the audience, and he said, “I’m a pediatrician, “and I can no longer practice medicine in the same way again, and I will offer a medical exemption to vaccination for anyone who wants one.” Now, we all know what an incredibly precarious statement that is, given the current climate of mandatory vaccination in California. That was the kind of impact it’s had.

As Polly has now gone on tour around the country, with the Vax bus collecting these extraordinary stories, these heart-rending stories of children, not only developing Autism, but developing a whole slew of neurological and immunological problems right the way through to Sudden Infant Death Syndrome. We’ve had an increasing number of medical professionals, professors of medicine, nursing staff, chiropractors, and others coming forward and saying, “I’ve changed my mind. “This film has helped me change my mind. “It’s educated me.”

Has Vaxxed had the impact that we had hoped for? It’s exceeded every expectation. I mean, it’s been an extraordinary experience. It’s opened up a lot of people’s minds to this issue. I think one of the reasons is we relied exclusively on fact.

People said, “Why didn’t you include this?” “Why didn’t you include that?” Thompson gave us these facts. We stuck to those facts that were clearly provable, demonstrable by reference to the documents. For that reason, it passed legal muster. It was signed off, the distributor was happy with it. The movie theaters were happy with it, and there has not been a hint of recrimination in terms of people suing us for the content of the film because, again, it’s true. 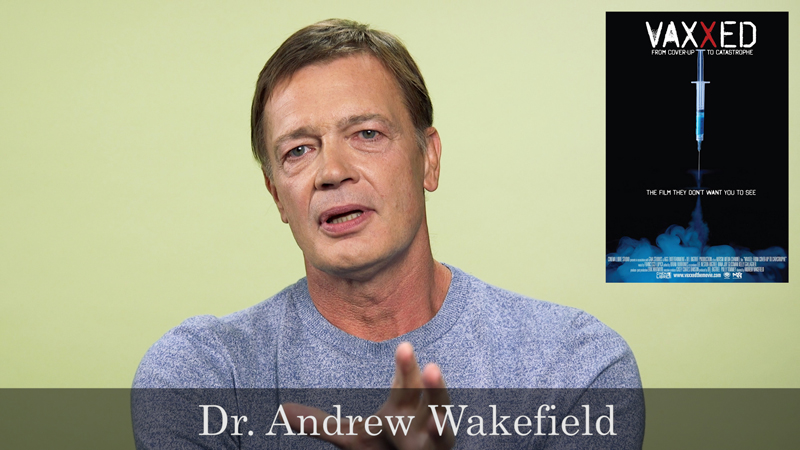