Mandatory Vaccination Ordered For ALL Children In Samoa 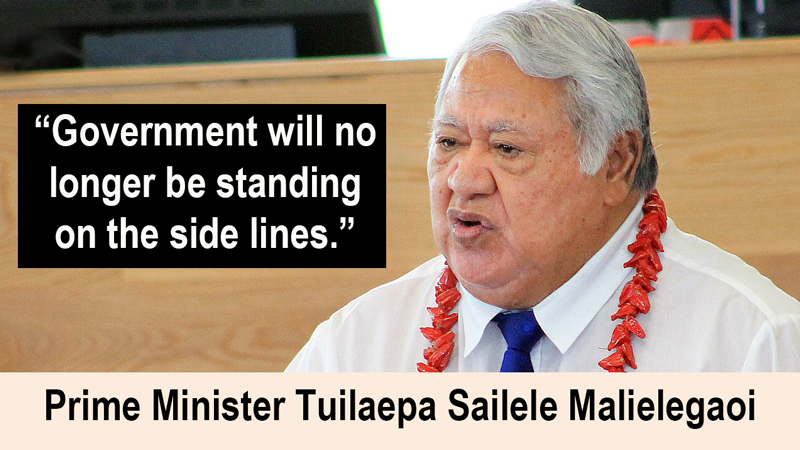 Mandatory Vaccination Ordered For ALL Children In Samoa

THE “LAW OF LOVE”

From next month, it will be compulsory for every child in Samoa to be vaccinated against measles when they reach the eligible age of six months. [RNZ]

It’s now a binding law, vaccination for any Samoan child from birth is compulsory as prescribed by the Infants Amendment Bill 2019 passed by Parliament yesterday.

Calling the Bill – O le Tulafono ole Alofa, (Law of Love) the Prime Minister Tuilaepa Sailele Malielegaoi says that Government has decided to have their concerns addressed in and by the highest decision making authority of the land – Parliament.

And its Government’s response to the measles outbreak and insurance that Samoa will not be left vulnerable to any future epidemics.

The legislation has far reaching consequences bringing together a number of key government sectors and the community stakeholders to play a leading role in the execution and implementation of the new law which comes with stiff fines as well as denying any child who does not meet the requirement an education.

“Government will no longer be standing on the side lines,” says the Prime Minister in tabling the legislation that includes amendments to the Infants Ordinance 1961, the Education Act 2009, the Village Fono Act 1990, the Internal Affairs Act 1995, and the Ministry of Women Affairs Act 1990.

And by incorporating amendments from the five different legislations, it speaks audible volumes to the Government’s message that they mean serious business.

Paramount to Government is to ensure a whole of society approach to, and a holistic implementation of this policy, the relevant laws are also amended.

For instance, it is now mandatory for parents or carers to ensure their child is vaccinated from birth.

Non-compliance attracts a penalty of up to $10,000.
But that is just the tip of the iceberg. The Bill now requires a certified copy of a complete, vaccination and immunisation record of a child from birth, is now a prerequisite for school enrolment.

Failure to provide this certified copy of a complete, vaccination and immunisation record of a child from birth, means the child cannot be accepted in a school (primary or secondary).

And parents or carers should also take note because if they willfully or recklessly provides false information in lieu of a certified copy of a complete, vaccination and immunization record of a child from birth, they are liable to a fine up to $10,000.

School Principals will also suffer similar repercussions should they accept a child for enrolment without the fulfilment of the prerequisite of a certified copy of a complete, vaccination and immunisation record of a child from birth. The fine is up to $10,000.

And it is a must for all schools, whether government, church, private or village, early childhood education centres to have vaccination policies that complies with the Ministry of Health requirements.

For those schools which have registered before the commencement of the Education Act 2009, they have 6 months to produce a policy. Failure to do so, may be a ground for de-registration.

In addition, effective 1st January 2020, it will be the duty of the Sui o le Nuu or Sui o le Malo, to require the vaccination and immunisation of children born in respect of his village, pursuant to the requirements of the Ministry of Health, and to develop a system to monitor and ensure this is carried out. The law binding mandate also applies to the respective Sui Tamaitai o le Nuu,

And yesterday Parliament endorsed the “Law of Love” with little fuss.

The Real Crises in Samoa by Dr. Sherri Tenpenny of VAXXTER

According to ReliefWeb, UNICEF delivered a total of 115,500 doses of measles vaccines to Samoa since October 1, including the required diluent, syringes and safety boxes, as well as sufficient supplies of Vitamin A. Vaccinations started, with the first death from measles occurs on October 15. Within a month, hundreds of cases of measles were reported and the government declared an emergency on November 15, leading to mass vaccination of everyone, irrespective of age, vaccination status or previous recovery. And then, the government requested USD$10.7M from the UN to prevent “future outbreaks.”

Is The Samoan Measles Outbreak Fabricated? by Maryam Henein of Honey Colony

“Doctors were using an Indian-manufactured MMR when all these kids died & then they switched. They weren’t allowed to use that batch of vaccines in Australia and New Zealand, but they imported it to Samoa regardless, and some Samoans are pissed.”

The country of Samoa just mandated that ALL children MUST be vaccinated. Don’t wait for this medical tyranny to reach your country – get involved!