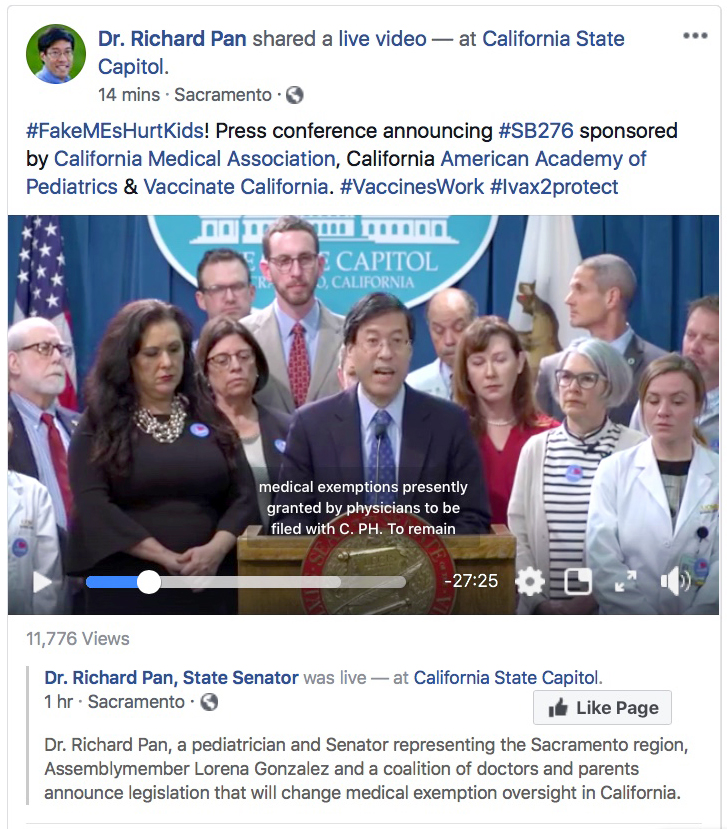 In a bold move to appease the liability-free vaccine industry, Senator Richard Pan announces new legislation that would effectively end the ability of MDs to write medical exemptions for children in California, reversing the argument he used to get SB277 – the vaccine mandate law – passed into law. See video below.

This bill will effectively END all past, current and future medical exemptions as we currently know them in California. Here is what you need to do TODAY!

Ok, California, time to get busy! Senator Pan has introduced the bill we have all been expecting. SB276, a bill to restrict medical exemptions in California, has gone live and Assemblything Lorena G, Senator Scott Wiener and Assemblymember Cecilia Aguiar Curry appear to be the first to support Pan’s monstrosity (although no one is officially listed as coauthor/sponsor yet).

What the bill does:

1. All medical exemptions must be approved by the State Public Health Officer (or approved designee).

2. All medical exemptions must be based on CDC contraindications only. These are VERY narrow – basically anaphylaxis.

3. All medical exemption requests must be submitted on a standardized form created by the California Dept of Public Health (CDPH).

4. All medical exemption requests will be tracked in a database managed by the CDPH. This will include personal and sensitive medical information about your children.

5. Any medical exemption written PRIOR to SB276 will also need to be approved by the CDPH and included in their database, by July 1, 2020. If the grandfathered medical exemption is deemed “fraudulent,” it will be invalidated.

Do these things today:

1. Call the following Senators (we will be calling several a day so that we can hit them all fairly quickly). Urge them to NOT coauthor SB276 and to vote NO when/if if comes before them for a vote.

Sample Script: “Hi, I’m calling to urge Senator __________ to NOT coauthor SB276, a bill to severely restrict medical exemptions. Furthermore, I would ask that the Senator vote NO should SB276 come before him/her for a vote. SB277 was passed BECAUSE of a broad medical exemption that was left to a doctor’s discretion. This broad medical exemption was explicitly supported in Governor Brown’s signing statement. The doctor-patient relationship should be protected. An appointed official who has never examined my child should not be making blanket medical decisions that affect my child. Our doctors know what is best for our children. Thank you for your time.”

2. Call the Senate Rules Committee (916) 651-4120 and politely ask that SB276 is double referred to the Senate Health Committee and the Senate Business, Professions and Economic Development

3. You have two legislators – a Senator and an Assemblyperson. Call them both. Urge them NOT to coauthor and to vote NO when the bill comes before them. Ask for a meeting with the legislator (not a staffer if possible – any meeting is great, though) in the next few weeks in their district office to discuss SB276. Ask if they have any townhalls or coffee talks on the calendar in the near future.

4. Start talking to people: friends, family, doctors, nurses, people that value freedom. Let them know what Pan is up to with this bill. Invite them to join Parents United 4 Kids. This is a freedom issue. Not a vaccine issue.

5. The tentative date for the 1st hearing and rally is 4/10 (hearing at 1:30, rally at 4:30). Please plan to get to Sacramento for this. We need unprecedented numbers! Please understand that we are at the mercy of the legislative process – the date could change. We will have official confirmation next Wednesday, but the best educated guess is that 4/10 is a go. We will be posting info about buses, the rally and the hearing in the coming days!

Have an awesome day! ❤️

We have already called the following Senators – feel free to call them if you have not already done so!

How did SB277 GET PASSED INTO LAW? In part, because of this…

CALL & MEET with your elected officials! Let us know how it went in the comments below.