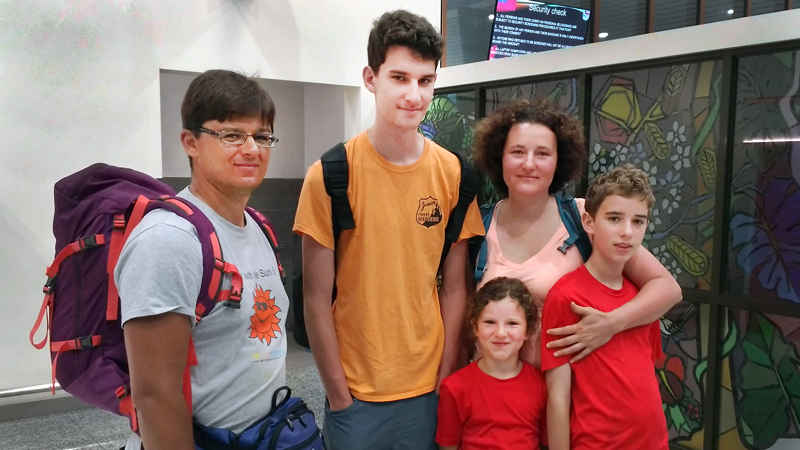 Nadia, the mom pictured above, suffered from severe eczema, horrendous skin issues, terrible allergies, and chronic illnesses as an infant and young child. It wasn’t until after she had vaccinated her first two children, and years later, when Nadia realized the connection between her own chronic conditions as a child, and the learning disabilities and behavioral issues of her first-born, were a direct result of vaccines. Of her four children, her youngest two who are vaccine free, are much healthier than her vaccinated children. Nadia reveals the startling differences between her vaccinated and unvaccinated children and reflects on her own vaccine injuries, childhood ailments, and vaccine-free lifestyle.

Nadia: My parents vaccinated me as was required at nine months old in 1973, in Russia. After the vaccine, I had serious problems. Doctors agreed that the injury was due to the vaccine and I was not to be vaccinated ever again. One thing that was certain — my immune system was compromised. I had allergies to everything. I was allergic to most foods, animals, dust, the sun (burned in five minutes exposed to open sunlight), and lots of other things. I was also allergic to penicillin and sulfonamides, and some other medications.

In addition to allergies, I also had severe eczema. My mom said my skin was mostly gone and it took years to get the situation under control. Since I was very little and could not control the scratching, my parents had to tie me up to stop me from doing it. My mom tells me that it was so bad that I had no skin on my body, just oozing blisters and wounds. The wounds were from my skin being severely irritated and me constantly scratching at it. I don’t remember this, but I do remember that I was not allowed to eat anything, but kasha (boiled buckwheat) and sugar free tea – nothing else.

To help cure the oozing wounds and skin irritations, I was given all sorts of topical and internal medicines. An older doctor suggested adding tiniest amounts of food back, like poison, to train my body to accept it. Eventually, I outgrew the skin issues and they stopped altogether after puberty.

Throughout my childhood, I was chronically sick. For two weeks I was sick, then went to school for a week. Stayed home with another strep infection for two weeks — all winter long. Sick all the time, I often missed school during preschool and elementary school years. At age seven, we were asked to run 100 meters. Tried my best, but I fell in the middle of the run because I was too exhausted and weak.

What I find exceptionally interesting is that because I could not have vaccines any more, I was sick with all the childhood diseases and survived. And since immunocompromised me lived to tell the tale after eight different “killing” sicknesses, I doubt those illnesses are so dangerous.

My first-born vaccinated son, George, (yes, I should have connected the dots much faster) has learning difficulties and behavior problems. George was born in April 2000 and had his first year of vaccines in the United States. He was a very strong baby, happy, and slept well. Then he suddenly stopped sleeping, was constantly farting, and crying. He seemed to have trouble passing gas. He would fart and fall asleep for 20 minutes and then cry again until something moved. Now, I understand it was dysbacteriosis. They did all the possible tests, including the overnight in a hospital with a tube in his nose, and told me he was healthy. George started that exactly at three months, right after his shot, which I didn’t connect until much later. He also experienced tummy aches that were unexplainable — nothing that my doctor would consider an abnormal reaction to vaccines.

George’s learning disabilities definitely include dyslexia, possibly Attention Deficit Disorder (ADD) and Attention Deficit Hyperactivity Disorder (ADHD). But since we homeschooled him since grade two, I never bothered getting him formerly tested. He has a very difficult personality, is incredibly destructive, and had a hard time keeping friends. Now at 17 years old, George has a couple of friends, and feels he has enough. I stopped vaccinating George when he was about three and a half years old when Sonia, my second child, was about one year old. He is the only one of my four children who has multiple allergies. He has hay fever and reacts to cats. He was tested and a lot of foods showed as triggers, but he ignores the food allergies since they don’t bother him.

My second child, Sonia, was vaccinated a couple times. I waited until she was at least one year old. A baby needs time to form his/her own immune system. That should take about a year, so no vaccines until at least a year old was my reasoning even then. Although at that time, I had not connected the oldest child’s problems to vaccines yet. Sonia had eczema when she was young. Although the eczema doesn’t bother her now, she still has very sensitive skin and easily burns, like me. My other kids were not vaccinated at all and they have no allergies. My never vaccinated kids could not contract chicken pox the four times we tried.

Nadia: I have four kids. My unvaccinated kids are very healthy and hardly ever get very sick. Even when we all got pneumonia a couple winters ago (must have been a viral one to get all six of us), I was very sick and actually was scared for my life. My husband was also very sick. My kids were very mildly sick, just a heavy cold with cough. Sonia never even went on antibiotics. She just dealt with it herself and recovered. I don’t remember how sick George was as I was out cold myself at this point. As a kid, he used to have very high temperatures at any sickness. By high, I mean 40-42C (104-107.6). I was always sick with extremely high fevers, myself, too. And I was allergic to penicillin and other antibiotics, so when I was sick with strep and ear infections (every other two weeks in winter), I had to overcome it without antibiotics.

Q: What advice do you have for families, parents, and others about vaccinations?

Nadia: We have different predispositions and it is very important to watch for the reactions in the family. When I meet families with two or three autistic kids, all vaccinated, I feel uneasy. I am not a doctor and can’t argue for or against vaccines publicly, but I am all for evidence-based science. And if evidence shows that your kids react to vaccines, it might be a good idea to experiment around it. It is what I did, even though without knowing that was what I did at the time.

Q: Do you have any ongoing health issues as a result of your infant vaccines?

Nadia: I am rather healthy now. Do my best to deal with my health issues in a holistic way and that might be part of it. I have thyroid issues, but refused to go on hormones. I can’t connect my childhood issues with my present day. Something positively turned around the time of puberty.

Q: Are you aware you can do detoxification protocols to eliminate toxins and heavy metals? Do you ever take any vaccines as an adult for the flu, etc.?

Nadia: I have been forced to have rubella vaccine right after I gave birth to George, my first-born and I was nursing him during that time. I never had any other vaccines as an adult. I was very nervous about receiving the rubella vaccine, but luckily nothing happened that I noticed. Interestingly enough, I was thinking and monitoring my reaction to vaccines, but not my children’s adverse reactions. Uneducated parents are dangerous.

I am aware about the existence of detoxification protocols, but never thought of going on one to deal with my vaccine damage. Maybe I should explore it.

Q: What is the biggest issue regarding vaccines in your opinion?

Nadia: Lack of information, finger pointing, and fear mongering. It is so obvious that something is going on, but instead of discussing it, we yell at those who raise questions and pass legislation to silence them. An argument that “all the scientists agree” is a lame one because at some point all scientists agreed that the earth was flat and burnt those who disagreed at the stake. Open discussions and education are much needed.