The Many Forms Of Vaccine Injury and What To Do Next

Larry Cook July 11, 2019 July 11, 2019Vaccine Injury
Thanks for subscribing! You can unsubscribe at any time.
Share with your friends...

The Many Forms Of Vaccine Injury and What To Do Next

Michelle Maher Ford of the Vaccine-Injury Awareness League describes how her first child was injured by vaccines, what those injuries looked like – short term and long term, what to do if your child is vaccine injured, and why it is important to dig deeper than what pediatricians tell parents to believe about vaccines. She also gives advice to parents who choose to keep vaccinating.

Questions About Vaccines?
Join our Facebook Group and read the Home Page!

My daughter was born in 1993 and, just like every parent, I took her in to get her vaccines and she had a horrible reaction, although I didn’t know that that’s what it was. She was having, she had a really high fever, she had exploding diarrhea, it was really orangy-yellow. I could tell that she was in a lot of pain by the way that she was arching her back and she didn’t sound like herself when she was screaming, she sounded more like a primate, I would say. Of course, back in the day, I had to page the doctor to find out what was wrong with her and tell the doctor and so the doctor said to bring her in the next day, she said if it was still going on and it was, it was all night long.

I didn’t even think about it being the vaccines until I brought her in. The doctor specifically said, “Bring a diaper, bring a dirty diaper,” but she was having diarrhea the whole time, I didn’t even need to bring a diaper. She said, “Oh my God, she’s not handling her vaccines.” First of all, that hadn’t even crossed my mind that it could be that. Then she said, “But just to make sure, we’ll see if it happens again.” I thought, “Oh my God, well she has to get all of her vaccines, this is a non negotiable.”

The symptoms went away, the doctor said that they would go away and they did. A few days later she was doing much better and she seemed to be fine but then at the next round of shots it happened again like clockwork so same thing; the screaming, the orangy-yellow diarrhea exploding, the fever, the screaming, arching her back, and so I brought her into the doctor again and the doctor confirmed, “Oh gosh, yeah, she is not handling her vaccines.” I said, “Well, what are we going to do, she has to get all of her vaccines.”

She said, “Well, don’t worry, we’ll just put her on her own schedule. We won’t do it exactly the way that the CDC recommends it, we’ll do it kind of on our own timeline,” and so her vaccines were way spaced out. She still got all of them but she, and after every time I brought her in she would have reactions. The weird part was, is that I wish the doctor would have said, “Oh, you don’t have to do them at all. Clearly, she’s one of those unlucky kids that’s having a hard time and so I recommend we don’t do it anymore.” I wished the doctor kind of shared more knowledge.

I didn’t even think to do my own research, I was such a young mom and I was vaccinated as a child. I didn’t count how many she got over the years but it was a lot. Thankfully, because they were so spaced out and because she had a doctor that was mindful, at least, and didn’t give her so many at each visit, I think that’s why she’s fine. I say “fine” because she still has digestive issues, she still has food sensitivity, she has a hard time with gluten. She has struggled with her weight.

We’ve been healthy eaters, for the most part. Actually that’s not true, when she was younger I wasn’t as healthy, I wasn’t as conscious as I am now. It messed up her sleep pattern for a number of years. She had a really hard time managing her mood. She struggled in school and she’s a very bright girl, she’s super bright but life just seemed kind of hard for her and she was always wanting to be kind of alone.

I think doctors in the early nineties were perfectly allowed and free to express when they had concerns about something but doctors today are not trained to do that. They’re trained to protect the vaccine agenda at any cost so if you’re a parent and you’re choosing to vaccinate your child, I have some advice. Number one, be sure to … I would videotape my child before and after every doctor visit; not just immediately after but for days after. Have a record of what your child is like before and after the vaccines.

Also, you’re the parent, trust your instinct. If you’re seeing your child having a reaction of any kind, you might want to get a second opinion. You might want to seek the advice of an alternative doctor, a naturopathic doctor, someone that’s familiar with treating symptoms of vaccine related injury whereas in the western medical model they’re just not trained to do that. They’re trained to dismiss everything as perfectly fine and normal and not to worry. Then, when your child doesn’t get the proper treatment things could go downhill and we have a lot of evidence of that all around us. Any slight change in your child should be immediately dealt with because it can spiral out of control really quickly.

Leave a comment below with your question or advice! 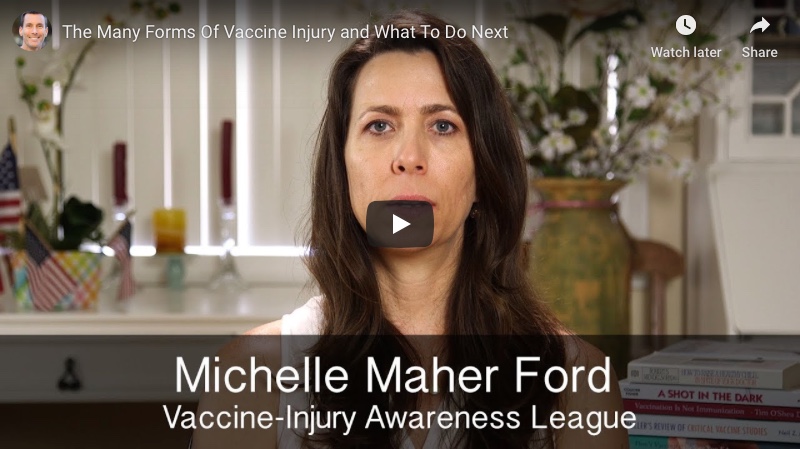