Larry Cook July 3, 2019 July 3, 2019Vaccine Injury
Thanks for subscribing! You can unsubscribe at any time.
Share with your friends... 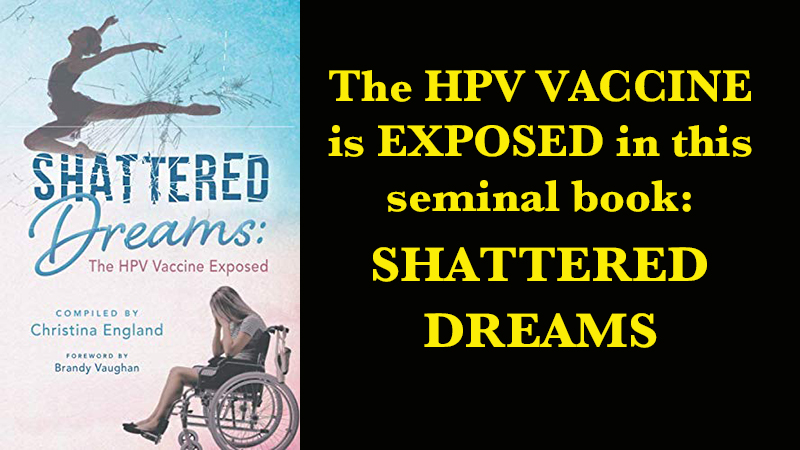 BUY THE BOOK ON AMAZON: https://amzn.to/2RRpuAo

It is a documented fact that since the introduction of the human papillomavirus (HPV) vaccination in 2006, more adverse reactions have been reported than with any other vaccine.

According to the World Health Organization (WHO) VigiAccess database, as of August 13, 2018, there had been a total of 84,986 reports of adverse reactions filed. These reports included 37,249 reports of nervous system disorders; 2514 reported cardiac disorders, including 35 cardiac arrests; 542 reports of postural orthostatic tachycardia syndrome (POTS); over 3000 reports of seizures or epilepsy; 8430 reports of syncope; and 401 reported deaths. These statistics are increasing every day and it was after reading these statistics, that I Christina England, along with Amanda Dew, whose daughter was injured after receiving the vaccine, decided to write a book highlighting the dangers of the HPV vaccine. However, we believe that our voices alone are not powerful enough to share our message, and for this reason, we decided to make this book very different from any other book. We decided to ask professionals from around the world to each write a chapter describing their own unique experiences of the HPV vaccination.

A new 724-page book, Shattered Dreams: The HPV Vaccine Exposed, brings together contributions from 13 scientists and health practitioners, legal experts, parents and activists to highlight the risks associated with the HPV Vaccine, including important new information that has not been published elsewhere.  The book is available for sale online from Amazon at £19.99 UK and $25.99 US.

The book is the brainchild of research journalist and author Christina England and HPV vaccine researcher, Amanda Dew, whose daughter Brodie suffered a severe injury after receiving the human papillomavirus (HPV) vaccine in 2015.

Topics covered by the book include: statistical evidence of known injuries; how the vaccine can affect future infertility; whether or not it is safe to receive the vaccine if you are using birth control; pre-marketing trials; case histories; the changing issues surrounding consent; ingredients and their effects and finally, the law surrounding the HPV vaccine.

This book is now on sale on Amazon throughout the world.
Amazon UK
Amazon US
Amazon Europe

About Christina England
Christina was born and educated in London, U.K. She left school to work in a children’s library, specialising in storytelling and book buying. In 1978, Christina changed her career path to dedicate her time to caring for the elderly and was awarded the title of Care Giver of the Year in 1980 for her work.

After taking an A Level in Psychology and a BTEC in Learning Support, Ms. England spent many years researching vaccines and adverse reactions. She gained a Higher National Diploma in Journalism and Media Studies in 2010, and in 2016 she gained a BA Hons degree in Literature and Humanities. She currently writes on immunisation safety and efficacy for VacTruth, Health Impact News, GreenMedInfo, The Liberty Beacon, Vaccine Impact, The Truth About Vaccines, Arnica and Medical Kidnap.

She has co-authored the book, Shaken Baby Syndrome or Vaccine Induced Encephalitis –Are Parents Being Falsely Accused?with Dr. Harold Buttram and Vaccination Policy and the UK Government: The Untold Truthwith Lucija Tomljenovic PhD, both of which are sold on Amazon.

About Amanda Dew
Originally from London, Amanda spent several years working and living in southeast Asia. After witnessing the spirit and determination of children living on the streets, she felt compelled to volunteer at one of the local orphanages. Following the birth of her own children, Amanda began working in a preschool, devising mini-gym programmes and creative sessions with the primary aim that the experience should be fun.

In 2010, after her return to the UK, Amanda began to study for a degree in Health Sciences. During this period, her daughter developed epilepsy and other chronic illnesses, which started shortly after administration of the HPVvaccine. Despite assurances that the vaccine would protect her daughter against cervical cancer, her research to date does not support this assertion, and further reveals many other troubling facts linked to HPV vaccines.

Amanda has recently completed a literature-based research module as part of a Master’s Degree in Science and now focuses her time on raising awareness of the truth about HPV vaccines.