“My Family Was Devastated By Vaccines” Tasha Dāvid, AVN President

Larry Cook March 7, 2017 March 7, 2017Vaccine Injury
Thanks for subscribing! You can unsubscribe at any time.
Share with your friends...

“My Family Was Devastated By Vaccines”

Tasha has 6 vaccine injured kids and 2 healthy vaccine free kids. Her 6 vaccine injured kids include diagnoses of Autism, ADHD, severe mood swings and severe language disorder, as well as gastrointestinal issues, skin problems, chronic ear infections, chemical sensitivities, and many other health issues. However, her vaccine free kids are very healthy. Her 6 kids who were vaccinated always had more health issues after vaccination, but Tasha never understood that the vaccines were destroying her children because the doctors never told her. Tasha Dāvid is President of Australian Vaccination-skeptics Network Inc. and advocates that parents have complete choice over whether or not to vaccinate. She believes that a vaccine free lifestyle is a healthy lifestyle. Tasha Dāvid suggests that parents do their own research into vaccines and vaccination.

Basically my story is that I have eight children, so out of the eight children, I actually vaccinated six to varying degrees. And out of the six I have three with autism, one with ADHD, one with a severe language disorder, and one with severe mood swings. It wasn’t only neurological, it was also chronic health issues as well. They had gastrointestinal problems, asthma, eczema, psoriasis, urinary tract infections, chronic ear infections, food intolerances, chemical sensitivities, basically everything under the sun. Bronchiolitis was another issue that came, it came to the front especially after each lot of vaccination. That was a reoccurring diagnosis that my children seemed to get.

But like I said, you know, after every set of vaccinations, my children either got a rash of some kind, like eczema, especially my 14 year old when she was a little girl, when she got her two month vaccination she had full body eczema, so we had to go see a specialist. We had to buy those little gloves to stop here from scratching her skin because of the bleeding. It was that severe, but I didn’t know that vaccinations could cause those kind of issues, so I was totally oblivious to all these warning signs, these red flags that were coming. No one told me. The doctors didn’t tell me, they didn’t know, so of course I didn’t know. I just thought that was just the norm, you know.

So basically we went to genetic testing to find out what the heck was happening with my kids. Why did they have all these disorders and health issues. But they found no reason, no genetic reason for all of the issues that my children were having. So I started to do my own research. My brother actually said to me, “You’ve got to read this book.” And so I read this book and it was called Evidence of Harm by David Kirby, and my eyes were just opened and I was so angry. I just, it’s hard to explain. It’s just like suddenly you realize you’ve been lied to, and that your children actually suffered because of these lies that you were told, that your own ignorance of this issue. It’s hard for me ’cause I do look at, I research things when I want to buy something.

So buying a new car, or TV, or a phone, you research the stuff. You look into it, you go okay, what are the pros and the cons, what’s the best brand. But when it comes to something as important as your own child’s health, you just go with the flow. It’s like you look at that white coat and go, okay, he knows what he’s talking about, so whatever he says, that’s what I’ll do. So I was one of those moms that just listened to the doctor instead of researching.

So that’s something that I always have to deal with, the fact that I didn’t do my due diligence when it came to my own children, and they suffered because of it. So basically after finding out about this issue and seeing that there were other families that were having the same kind of chronic illnesses and neurological disorders in regards to vaccination, I didn’t vaccinate my two youngest, and they’re completely healthy. Never had an antibiotic in their life, just no neurological issues whatsoever. And the only difference between my two little ones and their older siblings is the fact that I didn’t vaccinate them.

So in my family it’s a very clear picture of the affects, the adverse affects that vaccinations can cause in some children. Sometimes I get asked the question, are you worried about the fact that your unvaccinated children are gonna be at risk of diseases, like measles or mumps, or chicken pox, and I always have to tell them that no, for me, I grew up having measles and mumps, and I actually remember it, and it’s actually a good experience for me actually. It’s a memory of me being with my parents while they looked after me and it wasn’t a bad time. I actually remember it with a fond memory.

And the beauty of that is that I actually have lifetime immunity because of it. So a lot of the issues now that we are facing with vaccinated mothers now are having children, they’re not passing on that strong immunity to their babies that they should be doing. Because they’re vaccinated, they don’t have that strong immunity. That’s scientifically proven that that is a fact. So I mean, we are getting into the state where we’re dependent, we’re becoming dependent on booster after booster. Our natural immune function is being lessened. It’s not doing the job that it should be doing. We’ve become independent on drugs, and that’s not a healthy society.

I mean you look at what our society is now and over 50% of our children have chronic illness. And when I think about the average child, or basically in Australia right now the average child goes to see a doctor 11 times a year, so that’s almost once a month. My children don’t go to see a doctor. Years. The last time my child went to a doctor was just to get some ear wax removed, so they’re extremely healthy. My son actually was at school, his preschool at the time, his teacher had whooping cough. Other vaccinated children got whooping cough, but my son didn’t. So there’s not this automatic susceptibility that they see our children as little reservoirs of disease at the slightest little bit of disease they all get it, it’s not the case at all. I’ve actually found the opposite.

With my children, the ones that are vaccinated are the ones that have the issues, they get sicker more often, more severely. But my little ones, if they get the slightest little cold or infection of some kind, it’s gone within like 24 hours. So they’re very resilient. So I don’t have those issues. To me, having to raise severely autistic children that are gonna be dependent on me for the rest of their lives, they’re never gonna have an independent life. They’re never gonna get married, never have a family, never have a job. They won’t have the potential that my two youngest have. I can’t think of anything more devastating than that. That was the legacy that I gave my vaccinated children, was that.

I would rather them take a chance with getting some little infection, which is basically benign in healthy, well-nourished children anyway, that can give you lifetime immunity. I mean there’s also the fact that there’s a lot of historical research that shows that children that get these childhood illnesses naturally actually have some protection against cancer. And I mean, cancer, to me, is something that we really need to be worried about. I think it’s one in two people now that have to deal with a cancer diagnosis. So if getting childhood illnesses naturally, that’s quite benign, that’s easy to tolerate for a child, can help with something like that, life-threatening like cancer, then I’m more than happy to follow the natural route.

I have six vaccinated children, and if I could do it all over again, I wouldn’t have vaccinated my children because they suffered because of it. But right now that choice is being taken away from parents, especially in Australia, and also the US. To make a choice in regards to medical interventions for your own children is becoming increasingly difficult. Our children are now being banned from school, from preschool. They’re losing out on payments that make it impossible for parents to, especially low income parents, to work. And this is to me completely unethical, immoral, and totally wrong. We are the parents that have to pick up the pieces of our children after vaccine injuries.

So if there’s gonna be a risk in regards to vaccination there should always be a choice. There should be no coercion, no mandates. It’s just wrong, for me, that parents are put in that position of having to choose between whether their child can have an education and whether their child can have a vaccine injury that could affect them for the rest of their lives. All parents, all parents, regardless of whether they vaccinate, whether they selectively vaccinate, whether they don’t vaccinate at all, deserve to make these choices because these are life and death choices for families, especially for one like mine. My family was devastated by vaccines. My children have lifelong injuries that will never go away.

They have dramatically changed the quality of life, and these kinds of choices need to remain in the hands of the parents that love them. Not in a government’s hands. They’re not the ones there that are with their children when they can’t sleep at night, when they’re hurting themselves, when they’re not able to go to school, and when their child is being bullied at school, and they can’t even tell them. They can’t communicate with them and say, look, this person did this to me. I have to guess. I have to try and find out what’s happening with my child because they can’t tell me. My child can’t tell me, “I love you mom,” and actually understand what that means. I’ve missed all of that, and that’s huge. You cannot get that back. There’s no price on that. It’s priceless, and it’s something that I will always miss in my children.

If you believe that parents should have the right to make choices for their own children in regards to vaccines, then please join the AVN, the Australian Vaccination-skeptics Network. So that’s for all you parents in Australia, we need you. We need your help, we need your voices. So come find us and we’ll work together to make change in Australia. 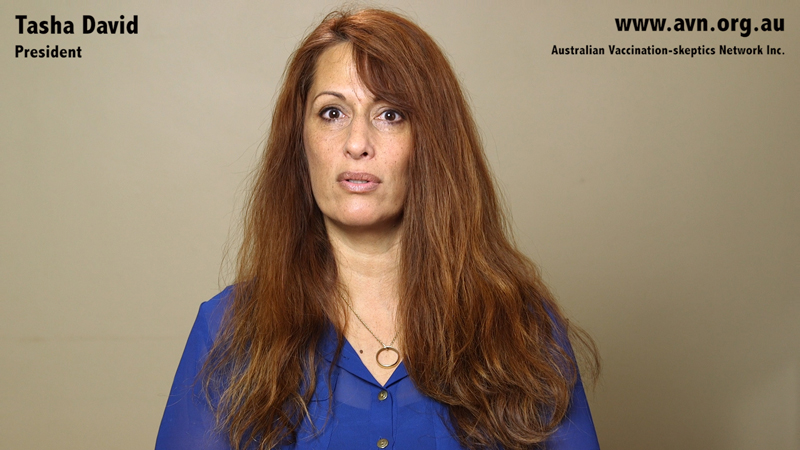