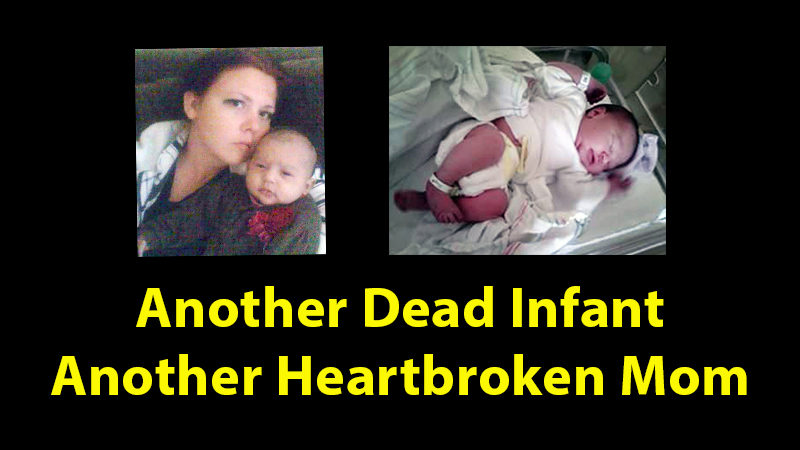 Crystal Cabell’s healthy three-month old daughter DIED within weeks of her infant’s routine two-month old vaccines. Crystal is one of countless parents that share an unfortunate truth, unbearable experience, and alarming tragedy. She remorsefully shares, “I lost a child and I know it was due from her getting vaccinated!!!” Crystal hopes her devastating story will create more awareness and ignite the deeper questioning of vaccination and its inherent risks.

Crystal: My daughter Maxeen passed away December 31st, 2012 shortly after she received her two-month shots. She was barely three months old when I got her two month vaccines a little late (around December 3rd) because I was busy. In that one doctor’s visit, she received the Hepatitis B, rotavirus, Hib, pcv (pneumococcal), and inactive polio vaccines.

After her vaccines, she started having cold symptoms and developed severe eczema. We brought her to the emergency room (ER) a couple of times before she passed away. Maxeen started having breathing issues – that’s why we had to take her to ER. She stayed in the ER for about three days, the second time we brought her in. The ER gave her oxygen and some breathing treatments. The ER doctors said she just had a bad cold. I didn’t think that was the whole truth but, I just trusted them. She passed away in her sleep a few days later.

At the time, we lived in Texas. Child Protective Services (CPS) came and took my older three kids until they received the autopsy results – which took six months. CPS took my older three children because Maxeen passed away in our home and they said they needed to make sure it wasn’t because we had harmed her. My older kids were 1, 3, and 4 year’s old, when they were removed from my home and care for those six months while we waited for the autopsy findings. The autopsy report just found that Maxeen died from natural, but undetermined causes. The medical examiner from the children’s hospital indicated in the notes that I was likely a carrier of Wiscott Aldrich, a rare genetic condition, that usually only affects boys, and that I probably passed it on to Maxeen. After her death, I got tested to see if I was a carrier for Wiscott Aldrich and found out I was not a carrier for this rare condition.

When I learned I wasn’t a carrier, I started looking into her real cause of death which led me to believe it was the vaccines, especially when I started to think about my husband’s oldest and I began to realize vaccines don’t just cause autism, they can cause death. That’s when I started doing more research and decided not to vaccinate any more.

Doctors make it hard though because they can be rude and look down on you for not vaccinating. When I try to explain why I chose not to vaccinate, it’s always, “Well, that’s no reason.” But to me, it’s a huge reason. My older three children used to get red knots the size of a half dollar at the injection site. The doctor always said, “It’s normal – happens to a lot of kids.” But it was not “normal”, even though a very common side effect and adverse reaction of vaccines. My children also would get high fevers after their vaccinations. And you could barely touch their legs without them crying their head off. My kids usually always got a cocktail shot, so I’m not sure which ones actually caused the swelling and knots.

I stopped all vaccines four years ago, when I realized that vaccines weren’t just bad for my kids — they are bad for me as well. Also, vaccines don’t actually work like the doctors say they do. The vaccines are “supposed to make you immune”, but I’m still not immune to certain things like rubella. I could go on and on, but you know the truth. I just keep getting told, “Shots don’t kill babies or cause other problems. The shots prevent issues.” I’m tired of hearing doctors lie. They love to point blame elsewhere, but never look to the shots.

So I stopped vaccinating my children and they are healthier than ever. I have six children ages 10, 9, 7, 3, 2 and 8 months old – and one on the way! We stopped vaccinating the oldest ones when they were around four years old. The three youngest are not vaccinated at all!! My kids hardly ever get sick. They might get a cold that lasts for a day or two and that’s all — maybe a cold every two years now.

Even before we had our eight-month old son, I always knew he wouldn’t be vaxxed because my husband’s firstborn, my stepson, who is 18 years old, was severely vaccine-injured. He was completely vaccinated and started having issues when he was two years old. He suffers from autism, among a host of other issues and health problems. Doctors diagnosed with him with allergies and he has seizures now. His dad believes all of this originated from the shots, but this is not the belief of his doctors or his birth mother.

Then after Maxeen’s death, I said, “Nope, no more vaccines period. This family is done.”

My advice for parents and others questioning vaccines?

Do lots of research before you decide to inject your kids with these vaccines. Ask your family and friends what they experienced if they got their kids vaccinated and did they have any issues. Really look into what vaccines can do to you and your kids. Life since Maxeen’s passing has been incredibly hard.

Some parents choose to go vaccine-free due to their avid and industrious gathering of research, the reviewing of the latest peer-reviewed journal studies and articles, their connection with other parents, from consulting with their healthcare providers and deciding that for their family’s health and family history, the risks of vaccines far outweigh the benefits. Some parents stop vaccinating their children and selves after the fatal loss of one of their children from vaccines and then they launch their vaccine investigation journey.

Please Leave Your Comments Below For Crystal