Melissa Curtin April 11, 2018 April 12, 2018Vaccine Injury
Thanks for subscribing! You can unsubscribe at any time.
Share with your friends... 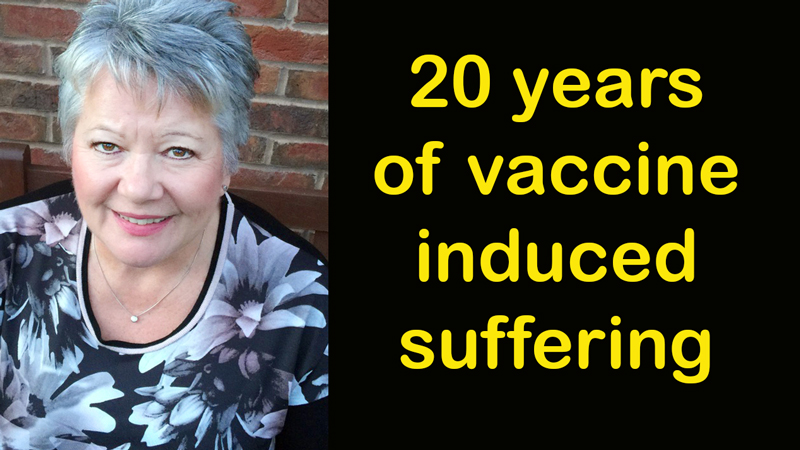 Sue Chippendale, from the United Kingdom, was a 40 year old busy wife, and mom of two small children and two dogs who worked part-time. She once described herself as full of energy and one who never tired. After receiving a tetanus booster in 1999, Sue suffered from nerve damage, a cornucopia of horrendous symptoms, and barely averted a tracheotomy. Almost 20 years later, Sue is finally well again through effective management of her two autoimmune conditions that also resulted from her vaccine injury.

Sue divulges her alarming tetanus vaccine-injury in her own words and shares her story:

Sue: I was invited by my general practitioner (GP) to attend a “well woman screening.” Made the appointment, as I believed that doctors knew best, — I had no reason to doubt them. A nurse asked me several questions, weighed me, took my pulse and blood pressure, took some blood to measure my cholesterol, and then asked if I was up to date with tetanus boosters. I didn’t know if I was up to date, as I knew that the last time I had one was when I was 19, so just over 20 years before, after a road traffic accident. I asked the nurse if she thought it was something that I needed. She said, “Yes.” So I received a tetanus booster. I have no idea whether it was the TDaP.  That was that.

Within a week, I had some strange symptoms – friends gave me a kiss on the cheek and it felt like an electric shock. Then I started feeling pins and needles in my fingers and toes. I felt uncomfortable sitting down – it was like I had pins and needles in my bottom. I saw a General Practitioner, and she said that I was stressed and gave me a prescription for beta-blockers – which I never took. I felt unable to argue with her. Then another couple of days passed and I experienced a huge amount of pain in my back, like I was having waves of cramps in my spine. My husband took me to A&E (Accident & Emergency in the hospital) where they gave me painkillers. Then the following night I was rolling around in agony and rang for an ambulance. The paramedics were a bit dismissive, as I couldn’t explain the pain, but didn’t know what to do with myself. I was given suppository painkillers.

The next day my face dropped on the left side and my husband thought I had suffered a stroke. I pleaded with my doctor to come out to see me. I was just sort of shuffling by that point. Friends collected the children to go to school and they left the door on the latch, so that the doctor could walk in. My doctor asked me to stand up, told me to close my eyes, and I just slumped back on the sofa. He tested my reflexes — there was no response. He told me that he would make an appointment for me to see a neurologist. The doctor didn’t indicate what he thought it was to me, but told the neurologist he thought that I had Guillain Barre Syndrome (GBS).

We had private health care, so I visited the neurologist in a couple of days. He kept scraping my feet with a spatula, which was pure agony. He asked if I had been suffering with a sickness bug or anything. “No,” I answered. Next, I was admitted into a private hospital. Barely able to walk, I was just shuffling and couldn’t use my hands, or lift my legs up. I was told that I had Guillain Barre. They took my blood pressure every half an hour as they told me to expect the paralysis to travel up to my heart and lungs and informed me they would need to give me a tracheotomy. They gave me immunoglobulin intravenously. I had to be bathed and could barely move as the paralysis moved up my arms and legs. Luckily, the paralysis stopped just under my chest, at the top of my stomach, and I avoided a tracheotomy.

It was tremendously scary and awful to see my young children and family worried. I was in hospital for two weeks. They performed some tests that I don’t know the name of, but it just felt like I was being electrocuted. They applied electrodes and I believe they were measuring how my nerves were working. I felt just the same when I returned home – awful. I had to be looked after, had to have my legs lifted onto the bed at night.

A man visited me from the GBS charity. He said that it’s all about getting better slowly. I remember looking on the Internet searching for information about Guillain Barre and what could have caused it. My GP declared that he thought it was best for me to never have another vaccination. There was “NO FLU JAB” written in huge writing on my medical notes. It is only now that I realize that my doctor should have filed a Yellow Card to report my adverse vaccine reaction and that I could have claimed compensation. The neurologist just said my condition was caused from campylobacter, but I hadn’t been ill at all. Finally, I found some information online about Guillain Barre occurring after the flu jab and sometimes a tetanus booster. Slowly I recovered. Returned back to work after around three months, but it actually took me a few years until I no longer felt numbness in my hands and feet. Then I had awful fatigue, which I had never ever experienced before. Prior to this vaccine injury, I was never tired and used to have a lot of energy.

In 2006, I started having awful symptoms such as anxiety, dry skin, constipation, depression, hair loss, sinusitis, dry throat, fatigue, puffy eyes, and body aches. Eventually, I found out for myself (as doctors failed to see) that I was hypothyroid (under active and low thyroid). In the UK, they just look at the thyroid-stimulating hormone (TSH) blood test and they wait for it to rise to ten, which mine eventually did a year later.

A private virologist, who I saw, shared that Guillain Barre was my first autoimmune disease and now Hashimoto’s Thyroiditis was my second one. More than likely, I would not have thyroid disease if I hadn’t had Guillain Barre. The diagnosis and treatment of Hashimoto’s is inadequate. It took me five years for my health to improve as I battled to be diagnosed and couldn’t tolerate the standard levothyroxine. I was in bed, slept 20 hours a day, and housebound at my worst. If I was well enough to go out, I had to use a mobility scooter. Recently, I have improved further as I follow a gluten and dairy free diet, my thyroid levels are handled, and I have become informed about natural health.

I started reading books by functional medicine doctors, following their blogs, and researching other resources. Then I came across “The Truth About Cancer” series a few years ago, which really opened my eyes. Since then, I have listened to hundreds of hours of documentaries and films. I found the Vaxxed movie just after it was released and was really pleased to meet Polly Tommey, Dr. Suzanne Humphries, Anu Vaidya, and Brian Burrows, when they toured the UK in May 2017. I also attended the premiere of Vaxxed and met Dr. Andrew Wakefield in February 2017. Now I do whatever I can to raise awareness of vaccine injury.

Currently, I am undergoing Bioresonance Therapy and the nutritionist I am seeing felt it would be helpful to know exactly what was in the tetanus vaccine that I had. In the last few years, I have moved, so when I asked my current doctor, and wrote to my previous surgeon, and surprise surprise, there were no details. All it says on my computer notes is “June 2009 tetanus booster due,” meaning that I had a tetanus booster in 1999, but no further info. (My doctor reviewed other patient’s records around that same time period that showed they only received the tetanus shot as the booster, so he guesses that’s what I had.)

Was Sue’s tetanus booster really necessary given that in the UK, only about a handful of people a year actually contract tetanus? In 2013, there were seven total tetanus cases in the UK. Was the shock and damage to her nervous system, suppression of her immune system, and decline in her quality of life worth any manufactured “benefit” of the tetanus shot booster? In a study from the New England Journal of Medicine conducted on eleven healthy adults, results indicated severe immune system repression after tetanus shot boosters, and not surprisingly “T-helper cells fell to levels found in active AIDS patients.” During the time period (1990-2011) when Sue received the tetanus shot, there were 117, 360 adverse events reported to Vaccine Adverse Event Reporting System (VAERS) – as a result of tetanus containing vaccines.

Sue was not even informed which tetanus vaccine she received and her records do not specify. Was it the Tetanus diphtheria (Td), the combined tetanus (diphtheria/inactivated polio vaccine (Td/IPV), or the TDaP (tetanus-diphtheria-acellular pertussis)? In the UK, typically for adults, the TDaP “teenage booster” shot or the Td/IPV are routinely administered. Had Sue been aware of which tetanus booster she received, the toxic ingredients in the tetanus vaccine, the risks and side effects caused by this vaccine, and that “tetanus in the UK is extremely uncommon,” perhaps she would not have agreed to be injected. Tetanus Booster? Is it really needed every ten years given how uncommon tetanus is? The only thing this shot boosted for Sue was the fast track to damaging and suppressing her immune system.

A current research study suggests we don’t actually need a tetanus booster every ten years. The lead researcher, Mark K. Slifka Ph.D., suggests there is not enough information to prove or disprove the ten year booster timeline. “The new research looked into how long 546 adults were actually protected against diphtheria and tetanus, and found that they contained antibodies against the diseases for up to 30 years after receiving their last booster – way longer than previously assumed.”

Sue’s recommendation to anyone considering vaccinations: whatever age – do your research, learn what the vaccines contain, and after researching you will see that none are necessary. I have never had a vaccination since that tetanus booster and I never will!