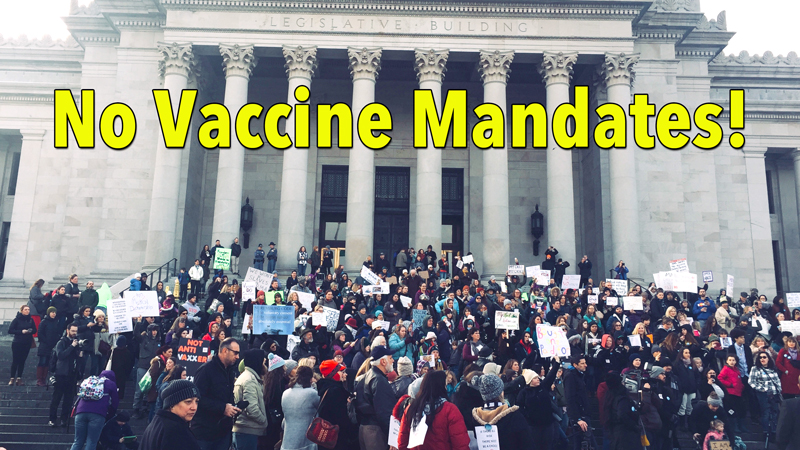 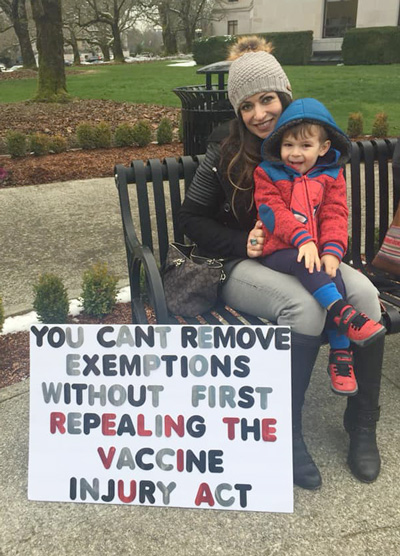 The Washington State Capitol in Olympia on Friday, February 8, 2019, was filled and buzzing with thousands of concerned citizens and families who drove in from all over the state to attend a public hearing for House Bill 1638, titled, “Promoting immunity against vaccine preventable diseases.” Woven within this misleading bill title is a clause that strives to remove the philosophical/personal exemptions to the MMR (measles, mumps, and rubella) vaccine for children who attend both public and private schools and licensed daycares.

Early lines at the Capitol started at 5:00 am as eager parents and vaccine choice advocates braved the freezing temperatures and biting cold – even with predicted heavy snow fall. Patiently, they waited outside for well over an hour until they were granted entry into the O’Brien Building to sign in for the 8:00 a.m. hearing. Attendees were advised to sign in to the legislative portal on their mobile devices to register their support or opposition to the bill. Due to the enormous turnout, several overflow rooms were set up to live stream the hearing, including extra viewing rooms in the Senate area. Capitol security staff reported that this was the largest crowd turnout for a bill with over 2,000 people.

The crowd overwhelmingly opposed HB 1638 for a multitude of reasons: from lack of vaccine safety, personal freedom, violation of parental/human rights, bodily autonomy, the fraud that Merck faces due to omitting data and manipulating the efficacy of the MMR, the ingredients, the risks and injury from the vaccine are greater than contracting the measles, government overreach for personal medical decisions, mandating a liability-free product due to the National Childhood Vaccine Injury Act of 1986, no proper safety studies using a double-blind placebo, the violation of informed consent, and numerous additional concerns. There were also pro-vaccine supporters that expressed strong opposition to the HB 1638 bill who were against the removal of parental rights.

Several news media reporters and TV crews were on site from KIRO 7, AP News, the BBC, and other news outlets to interview hearing attendees and concerned parents on why they opposed the HB 1638 bill. 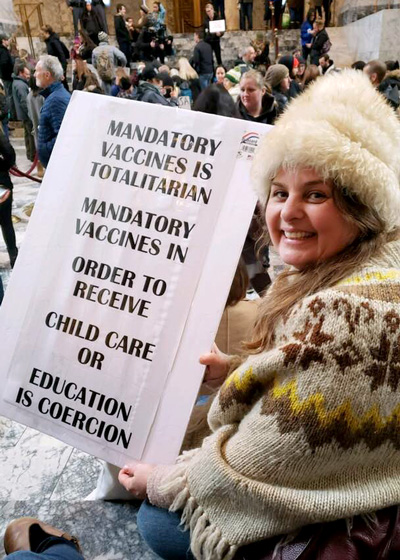 Washingtonians, and some out-of-state residents who gathered, were supported by expert panelists that spoke in opposition to the bill including Robert F. Kennedy, Jr., Dr. Toni Bark, Mary Holland, Esq., and Brian Hooker, PhD. Unfortunately, the House Heath Care and Wellness Committee shortened the public hearing to just 30 minutes, instead of its usual hour allotted time; and expert panelists were only given three minutes each with no public testimony. Four panelists in support of HB 1638 also provided testimony. Each focused on how vaccines are “safe and effective,” how deadly the measles are, the safety of the MMR, and how the outbreak is “pulling resources from their health department.”

After the hearing, an energizing rally convened outside on the Capitol steps with featured guest speakers Robert F. Kennedy, Jr., Representative Matt Shea, Toni Bark, MD, James Lyons-Weiler, PhD, Mary Holland, Esq., and Jaclyn Gallion, an inspiring mother of eight and board member from Informed Choice Washington. Jaclyn emphatically spoke to the crowd, “It is time to call for the separation of Pharma and State and we will not rest until it happens!” For a full account of Jaclyn’s stunning rally speech, visit Health Freedom Idaho.

Below are selected quotes from the rally speakers. Video of speakers, from Matt Shea through Jaclyn Gallion.

Robert F. Kennedy, Jr.: “Do we understand risk and benefit? In order to answer that question, you can’t just know about efficacy, you have to know about safety. The only way you can scientifically know the risk profile of a vaccine or any medical product is through double-blind placebo testing. Everybody knows that, but most people don’t know is that of the 72 (doses of) vaccines mandated for our children, not a single one has been tested in a double-blind placebo test. Every single medical product that is approved by the FDA first has to go through double blind placebo testing…” (rally video of RFK, Jr.) 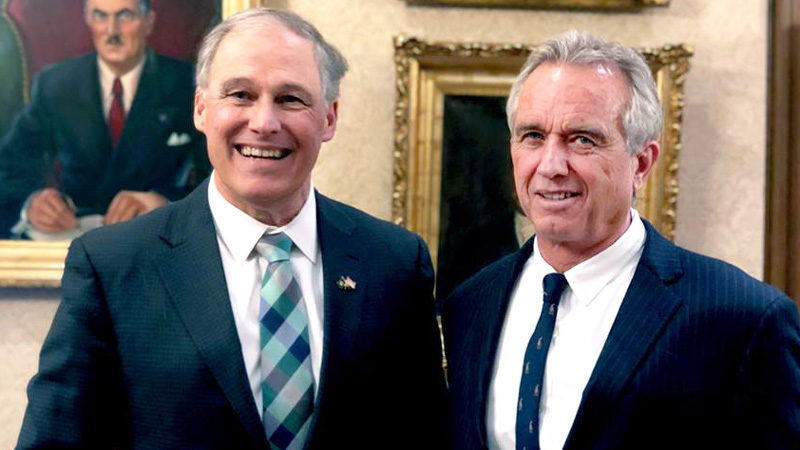 Representative Matt Shea: “Vaccines are safe? My response to that is, how many other things have paid out 4 billion dollars because they’ve injured people? Name one. Name one. If that was a car manufacturer, they’d be out of business today, wouldn’t they? We’re talking about our kids, our children. This issue was absolutely settled at Nuremberg. We have the inherent unalienable right to determine what goes into our bodies and what goes into the bodies of our children. I really love the fact that you are out here on a snowy day. We would go in below zero blizzard whiteouts anywhere in this country to defend the future of our children. Right? And I want to make sure you visit with your legislators today. It is unconscionable that 2000 people show up in Olympia in the people’s house, and only eight people get to speak? That’s not our country. Oh by the way, what are you afraid of that you’re going to cut off testimony from the public? If these vaccines are so safe and if this is really the right decision, why are you hiding? Why won’t you take public testimony? I’m going to send a protest letter to the Speaker today about this because – every other controversial issue has received an hour and that’s what the people deserve.” 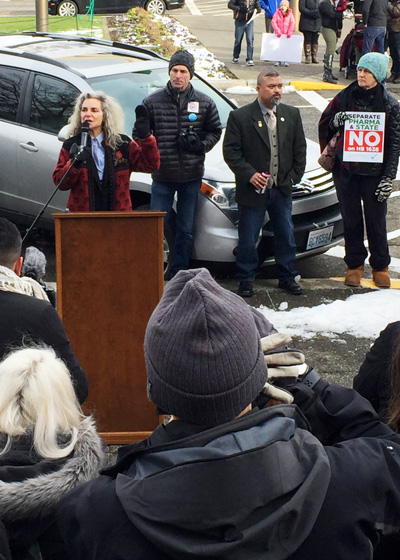 Mary Holland, lawyer: “You have a civil and human right for prior free informed consent for your self and your children. And you will not tolerate the violation of that fundamental human right. So the law that allows states to impose mandates is from 1905. 1905. Before the car, before the airplane, before women got the vote, before all kinds of things, everything, and it was about smallpox. Smallpox was a deadly airborne disease. Measles in today’s world with sanitation, and nutrition, and with Vitamin A is not a deadly disease and it’s not the same. In 1905, it was a mandate for the adults and they spared children. We cannot tolerate mandates for children when they add on and on without due process and without equal protection of the law. So I stand with you today.”

James Lyons-Weiler, PhD: “Are you informed? Yes. Do you consent?! NO!! Look up The National Research Act, of Regulation for Protection of Human Subjects of Biomedical Behavioral Research. You are already protected because every vaccine is an uncontrolled open clinical trial. Did you consent? NO! They are breaking federal regulations. They are breaking the law. They do not consent and you do not consent.”

At one point, Mary Holland asked the crowd how many have experienced vaccine injuries in their family and almost every hand was raised — some with both hands indicating multiple family members. Some shouted out, “I don’t have enough hands!” 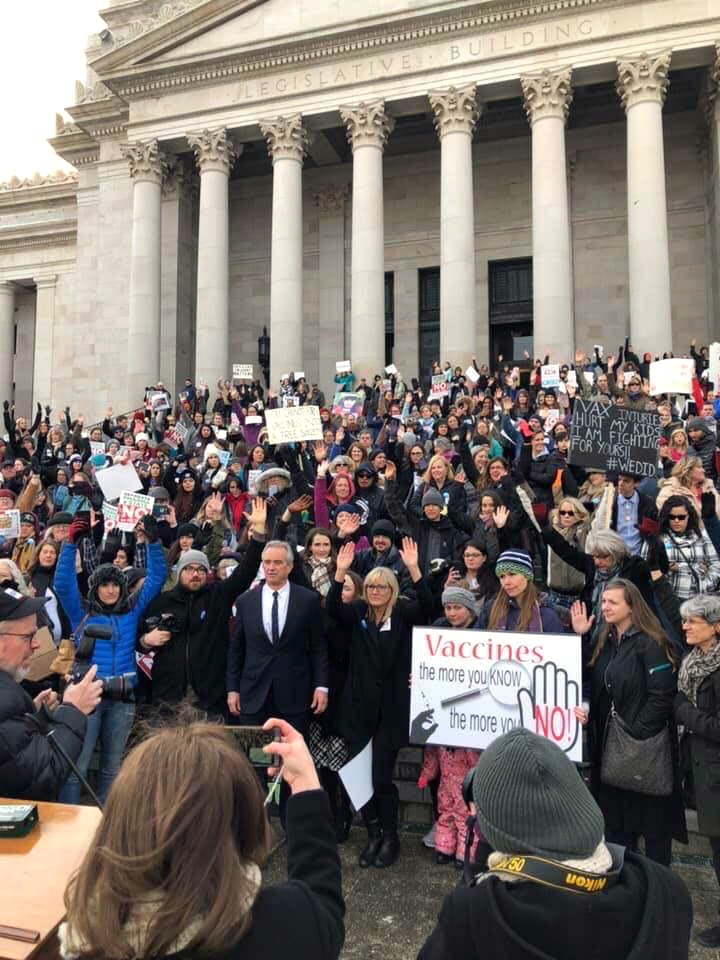 Even though the turnout was record breaking at the Capitol, legislators are still pushing hard to strip parents of their rights. The press conference that followed the hearing which ran longer than the actual hearing only included those in support of the bill. Many of the legislators’ end goal is to remove all vaccine exemptions, except medical, according to the attitudes and positions of the bill sponsors and some sitting on the House Health Care and Wellness Committee.

Unfortunately, elected officials did not want to hear any concerns about vaccine “safety” or “efficacy.” (Photo credit: Alissa Marie)

Following the rally, legislators were invited by Robert F. Kennedy, Jr. to attend a panel which addressed environmental toxins and vaccine safety and almost none showed up. Representative Vicki Kraft informed a constituent that she arrived 30 minutes after the panel started, but she did connect with Dr. Toni Bark and Brian Hooker, Ph.D., and traded contact info. (Let it be noted that Allen Acosta who ran for office, but wasn’t elected, was present for the panel.) The rest who are “no shows”– are our legislators, our representatives – most of them are operating from willful ignorance and arrogance, refusing to broaden their knowledge surrounding the lack of vaccine safety or are willing to recognize the deliberate conflicts of interests that surround the Department of Health and public agencies that are funded and subsidized by the pharmaceutical and vaccine industries.

Washington State is one of several states where vaccine choice and parental rights are in critical jeopardy from proposed bills that violate informed consent, human rights, and medical/health freedom. (The other states include New York, Oregon, New Jersey, and Colorado and many more). In Washington, there are active bills in both the House and Senate that seek to remove exemptions. House Bill 1638 in Washington aims to remove philosophical and personal exemptions to the MMR vaccine. Leading up to HB 1638’s hearing, a companion bill from the Senate, SB 5841, was filed, which if passed, removes the philosophical/personal exemptions, except religious and medical exemptions, to ALL vaccines, required for school attendance. These bills were drafted on the heels of media hysteria and fear-mongering. Washington State’s Governor, Jay Inslee, declared a “State of Emergency” as a result of a few dozen measles cases reported in Clark County, (in Southern Washington near Oregon) in a small subgroup of a religious Slavic community that was exposed to an Eastern European measles genotype strain. One measles case was reported in Seattle and one in Oregon.

The day of the hearing Robert F. Kennedy, Jr. privately met with legislators in their offices, and Jay Inslee, the Governor of Washington, to educate them and encourage opposition to HB 1638.

We must not stop to fight these egregious bills! More health freedom and vaccine choice advocates need to become more involved in raising their concerns. Up your civic engagement by calling, emailing, and setting up appointments with your legislators to help educate them about how these policies affect families, especially those with vaccine injured children or who have lost a child due to vaccines. 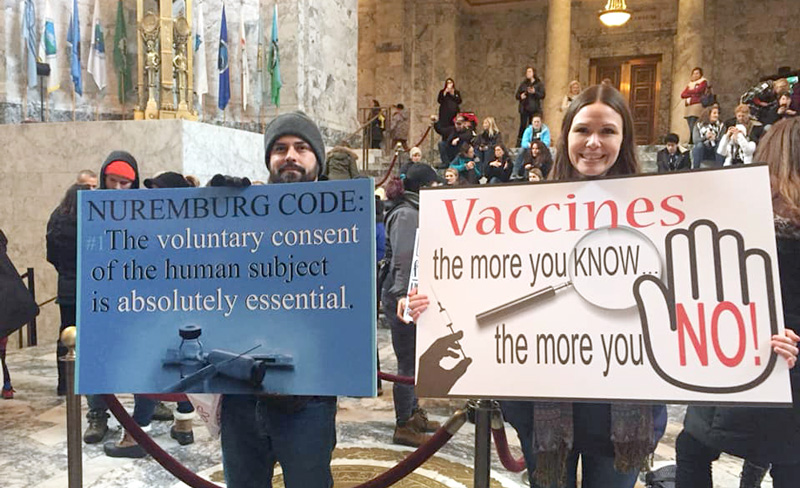 If you’re in Washington State, please join Informed Choice Washington and rally towards protecting your rights. California already lost this rights’ battle with SB 277 which removed all exemptions, except medical, and the state is worse as a result – mass exodus from the public schools, increase in special education services and costs, and rising health issues in children, including a 17% rise in autism since the bill went info effect. Don’t let Washington or the West Coast fall — the rest of the country will follow with mandates and it won’t just be for school-aged children, but adults.

Rise up and let your voice be heard! It’s a critical time to become involved and join together to fight for medical and health freedom nation and worldwide.