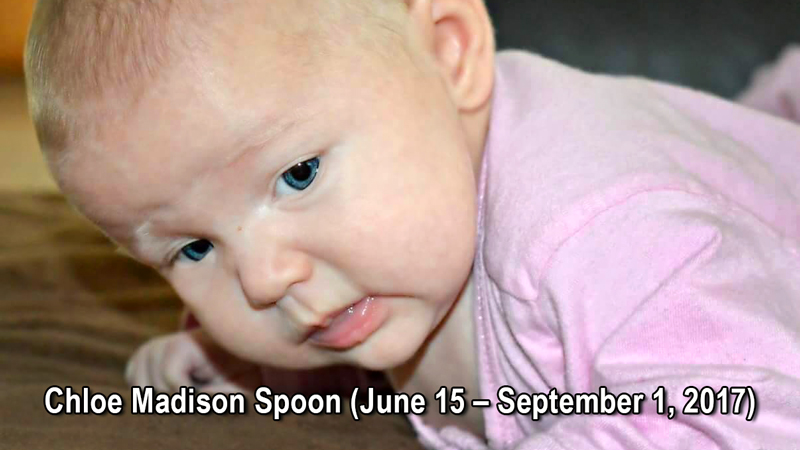 Kimberly Spoon and her husband faced a unbearable tragedy no parent should ever encounter. Their two and a half month old daughter, Chloe, died as a result of side effects from the Hepatitis B vaccine and Vitamin K shot given at birth. Chloe’s parents were never informed of the full detrimental risks and adverse side effects of vaccines, never provided informed consent, never offered a vaccine package insert or vaccine information sheet (VIS), and never given the list of toxic ingredients and foreign substances in the shots. Kimberly was just routinely told by the doctor “all babies need the Hepatitis B vaccine” with no explanation as to why. Never did she expect her perfectly healthy sweet infant to pass at 2 months and 17 days old.

This heartbroken mom was also not given a reason why her perfectly healthy baby died, even though her daughter’s adverse reactions were clear indications of vaccine injury. Her death was dismissed as Sudden Infant Death Syndrome (SIDS), even when there is growing evidence that SIDS should be more accurately named Vaccine Infant Death Syndrome (VIDS) as found in court cases and supported by medical research. Kimberly shares her painful experience with the hope that Chloe’s memorable story will bring awareness to the health issues, injuries, and deaths, that are often attributed to vaccines and our broken “healthcare” system. 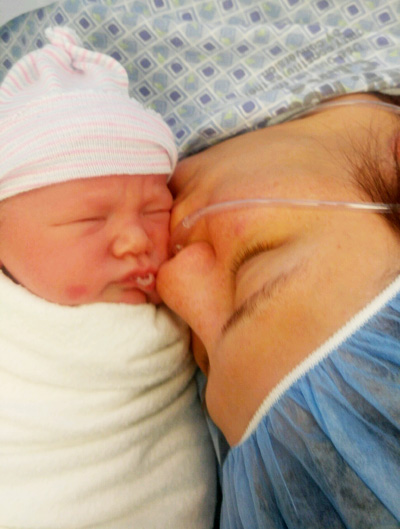 Kimberly
My daughter, Chloe, was born June 15th, 2017. She weighed 6 pounds, 9 ounces and measured 15-1/2 inches long. Chloe was a bright and happy baby like all my boys. She was amazing actually. She was in perfect health and growing fast. At birth, she had the Hepatitis B vaccine, the Vitamin K shot, and eye ointment. Within 24 hours of her shots, my husband and I noticed Chloe was breathing heavy. I asked the nurses in labor and delivery if that was normal and they told me it was fine. I kept bringing it up in the hospital and all they did was listen for a heart murmur. The sleep apnea started 24 hours after her Hepatitis B shot. At the time, I had no clue about the causes or side effects from the shots. She wasn’t treated because the doctor wouldn’t see her. We were told her TriCare insurance was not active when it was! Other than sleep apnea and the heavy breathing, Chloe had no other noticeable symptoms.

About 20 days after she was born, I kept calling to schedule her doctor appointments. I was told Chloe wasn’t in the system or TriCare insurance had not kicked in – even though she was covered from the beginning and was denied by family medicine and pediatrics. She was under her father’s insurance policy for 90 days. (Everything was already filed in July when my husband called it in before he was deployed.) Then I had to redo it due to TriCare losing her records. Then I finally got TriCare insurance fixed and Chloe died the morning before her doctor’s appointment.

Leading up to her death, Chloe was perfectly fine as far as I could tell – besides the heavy breathing, there were no other symptoms that arose before she passed. The heavy breathing was on and off every time she would breathe; it was heavy! She experienced heavy breathing ongoing from the time it started from 24 hours after birth, until she passed!!

Deep down inside, I know the Hepatitis B vaccine caused her breathing issues and death. My husband and I both believe she also got sleep apnea from the vaccine and want to fight this, but don’t know how. I’m trying to get justice for my baby girl – there is no help. No one has helped us uncover the truth. To this day, I feel like she passed from the vaccine they gave her at birth.

On the Center for Disease Control’s (CDCs) own website, it states the symptoms of a severe allergic reaction to the Hepatitis B vaccine: “Signs of a severe allergic reaction can include hives, swelling of the face and throat, difficulty breathing, a fast heartbeat, dizziness, and weakness. These would usually start a few minutes to a few hours after the vaccination.” Combining the Hepatitis B vaccine and the Vitamin K shot, an infant is given about 350mg of aluminum and both shots are connected to breathing problems. Vaccine injuries and infant deaths resulting from the bombardment of toxic ingredients and complications from vaccines are far more common that the CDC and the medical industry reveal or want to admit. Even the VAERS reporting system estimates that only 1% of vaccine injuries and deaths are submitted. We recently covered another horrific story where an infant died just four days after their Hepatitis vaccine and Vitamin K shot.

Q & A with Kimberly:

Q: Did your doctor, the hospital staff, or nurses give you informed consent about the Hepatitis B vaccine Chloe received [full risks/benefits/why she was getting it/who is really at risk for Hep B,  leaving it up to you to choose based on all the information, etc.]? Did they provide you with the product package insert, not just a vaccine information sheet (VIS)?

Kimberly: The doctors didn’t give me a risk sheet for any of the vaccines. I only knew of the fever, irritability, and minor risk. No full risk sheet of info or package insert. They just said that all babies needed the Hepatitis B vaccine. I didn’t and still don’t have Hepatitis B and neither does my kids. I didn’t understand why they gave Hepatitis B to babies who didn’t need it.  If we received any info at all, it was just the Vaccine Information Sheet (VIS). At the time I had no idea that vaccines were very unsafe and that they had so many chemicals in them! I was naïve!

Q: How has life changed since Chloe’s passing?

Kimberly: Yes, it has changed my family’s lives badly. We are going to counseling and therapy. I personally have night terrors and freak out when hearing sirens and flashing lights. I hardly sleep at night and I freak out over my boys a lot when it comes to nighttime.

Q: Were you aware the doctor and vaccine manufacturer cannot be sued for injury/death due to the 1986 National Childhood Vaccine Injury Act?

Kimberly: No, I wasn’t aware they couldn’t be sued.

Q: Did your doctor ever file a Vaccine Adverse Event Reporting System (VAERS) report for Chloe?

Q: Did they perform an autopsy? If so, what were the results and findings?

Kimberly: Yes, there was an autopsy performed. No findings. No reason to why they labeled her death SIDS. She was very healthy and they could not find anything.

Q: Are you familiar with the “vaccine court” through the Office of Special Masters? This is where you file a petition and begin the legal proceedings. If you seek a lawyer, you will not have to pay out of pocket from my understanding. Cases are awarded up to $250K. For reference, here’s a story we covered on a similar vaccine related infant death where the family was awarded.

Kimberly: No, but I will look into it!!

Q: How well do you feel supported by your health professionals, family/friends, and community around your experience?

Kimberly: Not at all. My friend, Angela, brought to my attention about the vaccines, but people think I’m freaking nuts!

Q: How many other children do you have and what are their ages?

Kimberly: I have three boys. Anthony will be 8 June 1st, Ashton is 3 years old, and Alec is 5 months old.

Q: Are your other kids vaccinated and/or where do you stand regarding vaccinations?

Kimberly: Anthony and Ashton are fully vaccinated and have issues. Anthony has Attention Deficit Hyperactivity disorder (ADHD) or Asperger’s Syndrome, a super bad temper, and none of this started until he was five years old. Anthony is also showing signs of Oppositional Defiance Disorder (ODD). The doctors said he is ADHD, but they never fully tested him. Ashton, my three year old, has speech delay and is also delayed in learning. This all started at about 18 months. He start banging his head on the wall and stopped progressing with everything after his shots. But, like the same as Chloe, I had no clue the vaccines can cause all these issues. Alec has only received the Vitamin K shot and Hepatitis B vaccine, but that’s because we still had no idea what the causes are or side effects that could happen.

Now, I am completely against vaccines!! I have fully read and did my research on vaccines. To know that my older two boys got injections with mercury, fetal cells, cat/dog kidneys, and so many disgusting things the poor babies don’t deserve. I believe it’s 100% wrong and inhumane to do this.

Q: What advice do you have for new parents, parents questioning vaccine safety, or who have health concerns over vaccines?

Kimberly: Please don’t vaccinate unless you are fully aware of what is in the vaccines and what they cause before you vaccinate.