I’ve been on the road for over 20 years, so, 4 or 5 events a week for 20 years. That’s a lot of events. That’s how I got conscious about this vaccine issue. I met so many parents, in particular, moms with vaccine injured children that it woke me up at one point. After hundreds of kids, I finally woke up and I started researching it. Then, looking into it. Then, came the internet and that allowed us to go deeper. To pick up the scientific journals without having to show up in the library, and I did actually get to the library of congress. Have done a lot of research in this area. To the point now where we need to look at this issue as an issue of medical freedom, of religious freedom. My religion tells me I don’t do this, so I don’t have to do this to participate in society.

They’re trying to drive a wedge to separate those who are independent thinkers. Those who are actually scientific and ready to do the tough science from participating in society, from participating in schools, from participating in government jobs. One of the tough questions. One of the tough question just we need double blind placebo controlled crossover studies on the schedule, on the 70 vaccines required in that schedule before we force that amongst the population. We need double blind placebo controlled crossover studies on each individual vaccine repeatedly and consistently to make sure they’re all safe, and they meet the pharmaceutical standard of safety, at least that.

Then on top of that, if we’re going to force everybody to be vaccinated, then, we need to know that herd immunity is real and we need to ask the tough questions there. We need the double blind crossover control studies that indicates that the herd immunity is actually happening. In order to do that, we get the excuse, “Oh, well, we can’t do that because then we’d be unvaccinating certain kids.” I’m sure there are plenty of volunteers right here with your kids and grandkids that would volunteer to be in that control group. That excuse is no longer valid. I wanted to read a quote from Benjamin Rush. This is one of the signers of the declaration of independence. Very prophetic, very interesting. Something we have to consider deeply into our hearts.

“Unless we put medical freedom into the constitution, the time will come when medicine will organize into an undercover dictatorship to restrict the art of healing to one class of men, and deny equal privileges to others. The constitution of the republic should make a special privileged for medical freedoms, as well as religious freedoms.” Whether we choose herbalism, acupuncture, Chinese medicine, Ayurvedic medicine, traditional methods of vaccination. Whatever our choices, it is our choice and it should not be put on as by the government forcefully in order to drive us out of participating in our own society. This is America. This is the Land of Freedom. This is Los Angeles. This is California. This is where the action is happening. This is where the future will be decided.

Let’s choose medical freedom. Please join me. I really, I want to ask you this. I get out there on social media. You’ve seen my social media on Facebook. We put stuff about vaccines out there. We battle those trolls and shills and gatekeepers, and all that. Whatever that terminology is and really, to put it out there, we need your help. We need your help when it’s on Twitter, when it’s on Facebook, we need you to chime in and say, “Hey, I have a healthy, unvaccinated child. My child was injured by a vaccine.” We need your help. We need your support. Thank you so much for being out here today. Let’s say no to SB277 and let’s make California free again. Thank you so much. 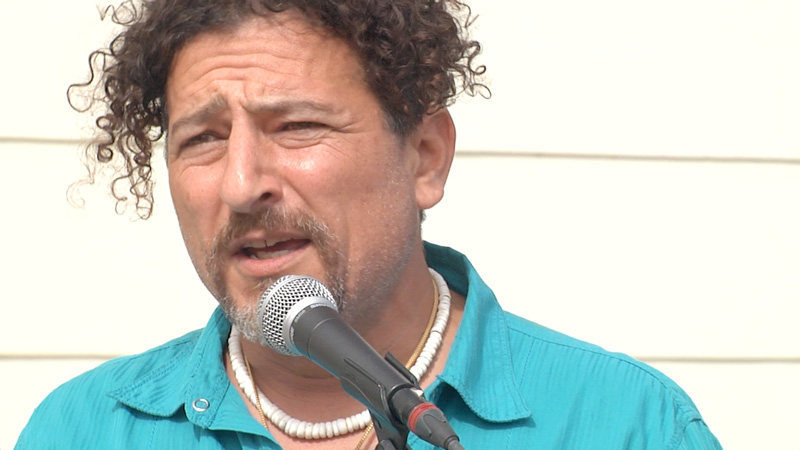