In this video, well-informed and educated parents object to and oppose CA SB277, which would eliminate personal belief exemptions for the vaccination of their children. In its current state, if SB277 became law it would require parents to have their children fully vaccinated in order to attend public or private school, even though there is no public health crisis and the diseases for which children are vaccinated against are not deadly when children have strong, healthy immune function. Vaccination is an invasive medical procedure that carries substantial risk, yet the manufacturers of vaccines are not liable when their products seriously maim or kill people. The decision to vaccinate or not vaccinate should be decided upon by doctor and patient with full informed consent, and not the government. In this video, parents make these following points:

Brittney Kara Mclaughlin
SB277 is a mandatory vaccination bill that would strip the parental right of parents in the state of California to choose, and to have informed consent, over a medical procedure for their child, which vaccination is a medical procedure. If we don’t choose to follow the CDC recommended schedule, which has almost tripled in the last 15 years, then our children are losing the right to not only a public education, but a private education, in the state of California.

Landee Crier
We’re basically kicking our kids that are not sick, they’re not contagious, on the supposition that they may, in the future, get a rare disease, and they might be sent to school with that disease, and they might get someone sick. We’re kicking children out based on that premise. There have only been 100 measles cases [166 cases] in the entire nation, basically, and there’s 320,000,000 people in the US. That is not compelling interest when no one has died from the measles.

Brittney Kara Mclaughlin
Initially on the bill, homeschooling was included in that bill as under the umbrella of SB277. They have since amended it to exclude homeschooling so parents do have an option, but for many families in the state of California, homeschooling is not an option.

Landee Crier
A parent cannot afford to quit their job, so they are basically going to be forced to vaccinate their children even if they’ve demonstrated a susceptibility to vulnerability to the vaccine.

Shannon Kroner
A vaccine decision should be something that happens between a doctor and a parent, and you want to work with your doctor to make those decisions that you’re comfortable with. I need to vaccinate my children or else they don’t get a proper education which is their right. It’s a constitutional right.

Landee Crier
My oldest got the chicken pox vaccine and got shingles in her eye following that. I have a, my middle child, who wheezed after his 2 month shot, and was diagnosed with full blown asthma by 18 months. My third child received a vaccination and went into anaphylactic shock following the DTaP shot. Basically, they’re all on personal belief exemptions because ti’s just not enough for them to get medical exemptions. My youngest can qualify for a medical exemption for the anaphylactic shock on the one vaccine, however there are numerous other vaccines, 15 other vaccines, that he would be required to get. My concern is that they hve the same ingredients I them that he reacted to. I have no way of identifying which ingredient which put him into anaphylactic shock.

Brittney Kara Mclaughlin
We had started vaccination with both of my daughters. They both had strong reactions to the shots that the did receive. My husband is a paramedic. We’re well educated people. We both have college degrees, and we individually, and collectively, came to the understanding that the vaccinations that are currently on the market are not safe for our kids.

Landee Crier
We had two children in Mexico die that were undergoing the national vaccination program. There are 6 others in grave condition, and 30 total that were hospitalized. The country of Mexico has suspended the vaccination program based on this occurrence. We’ve seen Japan. They do not vaccinate children unless they’re 2 years old or older because of the risk of death. We have 16,000 kids a year in the US dying from SIDS. We don’t have an explanation as to why they’re dying.

Brittney Kara Mclaughlin
Vaccines are individually tested, and I would argue they’re fraudulently individually tested, however that’s my opinion on the matter. The actual schedule, the 49 shots by the age of 6, has never been tested to show that it’s safe, to show that that amount of carcinogenic chemicals going into the blood stream of a developing immune system is valuable for a child. We have an increase in almost every neurological disease in children. One in five kids have a mental disorder. Autism’s on the rise. It’s one in 68 children. It’s taking away parental rights. It’s taking away informed medical consent. It’s making the state responsible for your child’s body rather than each individual parent doing their own informed, due diligent research about vaccinations, and it’s robbing a child of a public and private education.

I would encourage every parent, if you don’t really know what’s going on, and you’re wondering what are we all talking about, I would encourage you to do your own research. Look into the vaccination issue. Go on the CDC website and pull up the ingredient list in every single shot and consciously look at that and go, “Am I comfortable with those ingredients being injected into my child’s blood stream?” Weigh the risk and benefit, because that’s what all of us have done, and we’ve spent hours, and hours, and hours of our personal time, our energy, our money, our resources researching, educating people about this issue. It comes down to a choice, and SB277 would rob parents of that choice.

Landee Crier
I encourage you to get involved in this issue. This is a very slippery slope that you do not want to go down. If we allow the state to have the right over the sovereignty of our own bodies, where will it stop? Are they going to force us to take chemotherapy? Are they going to force us to take antibiotics for everything? We know that every single drug has risks. If you’d like to get involved and find out how to stop mandatory vaccination, please visit StopMandatoryVaccination.com and click on the “Take Action” tab to find a group near you where you can become involved. 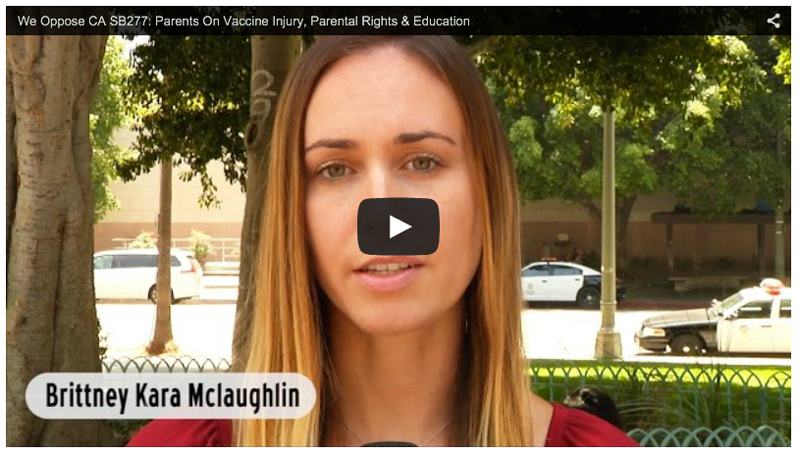