Randi Bussear October 15, 2016 November 16, 2016Vaccine Injury
Thanks for subscribing! You can unsubscribe at any time.
Share with your friends... 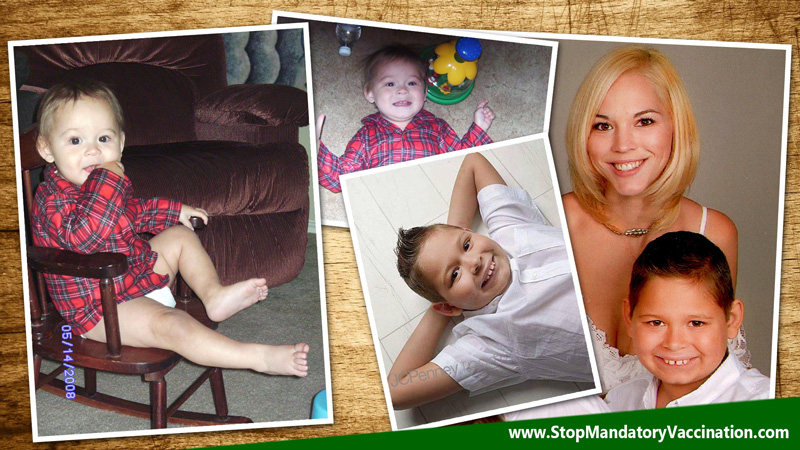 Lindsey gave birth to her first child, a precious baby boy she named Sylas, at 37 weeks gestation on 05-18-07. He was born healthy and strong, weighed 5lbs 5oz, and was 19½ inches long. Although Sylas was three weeks premature, and was just over 5lbs, the medical staff had no concerns about giving him vaccines on his first day of life. This healthy baby boy received the hepatitis B vaccine and vitamin K in the hospital on day one. Lindsey did not know at the time that both of these vaccines are linked to jaundice. She did what she thought was best for her infant and followed the doctor’s orders. However, Lindsey was concerned that Sylas slept for nearly 18 hours after receiving the vaccinations. He became lethargic and started turning yellow. Jaundice was diagnosed. Medical staff assured Lindsey that babies who are born early usually get jaundice and that he had a long journey and he needed to rest.

Sylas soon recovered and Lindsey’s worries faded as she and Sylas’ father, Jonathan, fell in love with their beautiful, cooing baby. Lindsey breastfed for the next three months and then returned to paid employment. She worked 70-80 hours a week waitressing and tried to stay up-to-date with Sylas’ “well baby” visits but was not always successful. Over the next year, Sylas had some pediatric appointments and received the recommended vaccines but did not receive them all on time. Lindsey remembers Sylas having eczema about a week after birth and being sick with a high fever every time he received vaccinations. However, it would take more than eczema and a fever for this mother to see the correlation between her infant’s health issues and the vaccinations.

When she discussed concerns about her son’s reactions and health issues with doctors, they would tell her that fevers were a common reaction to the vaccines and that the eczema was probably an allergic reaction to the laundry soap or body soap they used in their home. Therefore, Lindsey gave him the prescribed doses of Tylenol, changed her detergent and soap many times, but saw little to no result. Nothing seemed to help.

Other than high fevers, sleeping more than usual, and eczema  – which are stated in the vaccine package insert as adverse reactions – Sylas was a flirtatious, happy little boy, who was hurdling over each milestone. By 11 months, he was walking, talking, and engaging with everyone around him. He could say Momma, Dada, cheese, and other words common for that age. He also knew a little sign language.

A friend of Lindsey’s showed concerns about Sylas’ vaccinations not being given on time, so, feeling guilty, she took him in for his 12-month vaccinations, where he received the measles, mumps, and rubella (MMR) vaccine, and the chicken pox (varicella) vaccine in one visit. Trusting her doctor and thinking she was doing what was best for her child, he received both vaccines on 5-22-08, just a few days after his first birthday.

Within 24 hours, Sylas was in the emergency room with a fever of 105 degrees and screaming a high-pitched scream that she had never heard before. Again, doctors reassured Lindsey and Jonathan that Sylas would be just fine, and his reactions were “normal.” The doctor sent them home with another prescription of Tylenol.

Scientists know that Tylenol depletes glutathione in the body, thereby disrupting the detoxification of the vaccine which can then lead to oxidative damage, inflammation, and even brain damage.

Lindsey followed the doctor’s orders and the fever finally broke. The next day, Sylas woke up from a longer sleep than usual and was a very different little boy. He had “vanished” within a 24-hour period. He was no longer the little flirtatious baby that would bat his eyes at you when you called his name or looked at him. Lindsey says, “He was a happy-go-lucky, sweet, friendly, flirtatious, playful, enticing little baby that suddenly changed overnight.”

From that day after Sylas’ fever broke, Lindsey found he would spend up two hours turning their dishwasher knob, very contentedly. They eventually had to barricade the kitchen area to prevent him from obsessing over the dishwasher knob. More odd behaviors arose: He started biting and chewing on anything he could get his hands on. He became obsessed with lights and turning circular objects; he sniffed at everything. Sylas no longer slept through the night and sometimes not at all. He was also no longer able to swallow his food properly. Over the next few weeks, he began to throw tantrums, but unlike any tantrums Lindsey had ever witnessed, and he also began to self-injure. He would run into walls and bang his head. Some instances of self-injury and tantrums would last for 18 hours or more. He no longer played with his toys or ran to his mother and father with open arms. Lindsey and Jonathan’s once flirtatious, “happy-go-lucky” baby was now obsessive, very dramatic and self-injurious. His vaccinations had taken him into an extremely dark, lonely world.

Lindsey was concerned and confused. She did not understand what was going on with her son. She wondered if he was just going through some changes: perhaps it was just his Irish blood or perhaps he was hitting his “terrible twos” early? The doctors assured her, once again, that he was a typical boy and he would grow out of it. Unfortunately, this was just the beginning of a long, hard battle.

Still not connecting the dots between the vaccinations and her son’s declining health, Lindsey took Sylas in for another round of the diphtheria, pertussis, and tetanus vaccine on 8-22-08, and the influenza vaccine shortly after. His aggression, tantrums, and self-injury began to worsen and Lindsey started to question whether his behavior was correlated to the vaccines. She began to research for herself and stopped listening to pediatricians.

Shortly after his last vaccine, a friend’s mother mentioned that Sylas might have Autism and handed Lindsey a book by Jenny McCarthy called Mother Warriors. Everything finally began to fall into place and make sense for Lindsey. After the many doctor’s appointments, failed prescriptions, and unanswered questions, she finally found the information she required – vaccines were destroying her child. Jenny’s journey seemed very similar to Lindsey’s and so Lindsey sought out the proper medical assistance that her son needed.

Lindsey and Jonathan began to detox Sylas and at four years of age Sylas said his first word after nearly three years. One morning after breakfast, Jonathan asked if Sylas was done eating his cereal and he said, “YES.” This was a moment of victory and triumph so Jonathan immediately contacted Lindsey to share the wonderful news. Six months later Sylas also played pretend for the first time with a friend, they pretended to be Mario and Luigi. This, too, was a huge milestone.

Lindsey continues to detoxify her son of the vaccine poisons and his diet is primarily organic. He has regular Epsom salt baths and probiotic shakes. Lindsey is also saving for other therapies such as mild hyperbaric oxygen chamber therapy, magnetic resonance therapy and brain mapping. Insurance does not cover these very expensive therapies, unfortunately, therefore the financial burden is on the parents.

It will take some time to see a vast improvement in Sylas. He still has some anger issues and has difficulty controlling his impulsive behaviors but he is improving. The school regularly calls Lindsey to pick Sylas up from school as he throws objects and can be violent at times. It seems that the teachers do not know how to handle him.

If Lindsey could go back in time, she would have never vaccinated her children. Lindsey now has a daughter, Hailey, who is 16 months old. Nurses bullied Lindsey after the birth to give her daughter Hailey the vitamin K shot. The nurses told her Hailey would die without the shot. This child also contracted jaundice within 24 hours following the shot and Lindsey decided then that her children would never be subjected to a needle again. Hailey, today, is a very healthy and smart little toddler with no sign of cognitive or physical issues.

No matter how often a Pediatrician may say that vaccines are safe and effective or that these adverse reactions are “normal,” vaccination is risky and it is like playing Russian Roulette with your child. Any child, YOUR CHILD, could be maimed or killed by one single vaccine. Vaccine manufacturers, doctors, the CDC and government officials who mandate vaccines are not responsible for death or injury. Vaccines do not confer immunity, and it is questionable whether they offer any value whatsoever, especially since vaccines also destroy immune function. Trusting your Pediatrician for advice on vaccination can be very dangerous. It is up to you to do your own research and investigation into vaccine safety and efficacy before allowing anyone to inject a vaccine into your child.

Click Here to read why other parents have ultimately decided to stop vaccinating.

An excellent overview book on the topic of vaccination is What About Immunizations by Cynthia Cournoyer.

If you have a child with Autism, there is hope for partial or full recovery. Contact Talk About Curing Autism and also watch the video interviews at Biomedical Treatment For Autism for more information.