Larry Cook May 12, 2019 May 12, 2019Mandatory Vaccination
Thanks for subscribing! You can unsubscribe at any time.
Share with your friends... 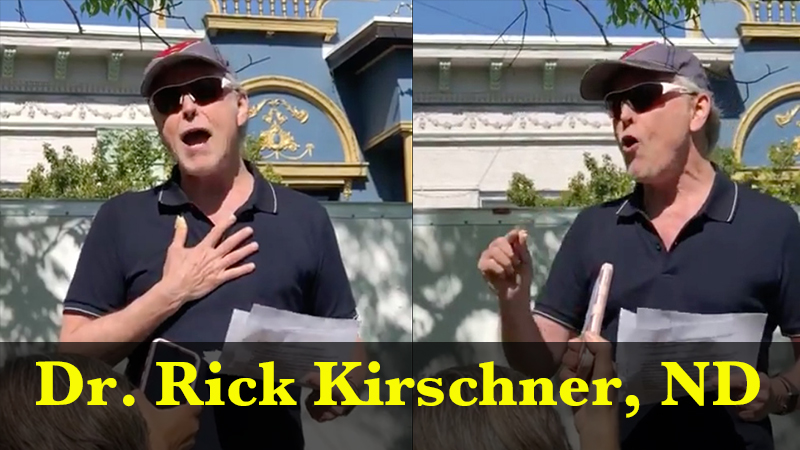 Hi Everybody! It’s a beautiful morning to talk about a dark and terrifying thing, HB3063.  So what is this bill really all about?

It can’t possibly be about vaccination. Our nation has the most highly vaccinated population in the world and Oregon vaccination rates are at all time highs. It can’t possibly be about student safety, since American children have sat together in school, generation after generation with NO concern or fear about vaccination status. It can’t be about the measles, since we had only 14 cases in our state, there was never an emergency or an epidemic, and our public health measures clearly were working.

It’s also not about the health of our children. Our country, in spite of having the most heavily vaccinated children in the world, in history, also has the highest infant mortality rate among developed countries, and we are witness to epidemic increases in the rates of chronic childhood disease. If we’re being honest, vaccines sure aren’t making our kids healthier.

So what is it about?  It’s about civil rights, human rights, and it’s about truth.  It’s about whether or not the government has the right to tell you how to take care of your body and your children’s bodies.

It is about whether or not Oregon lawmakers can take away your philosophical and religious freedom, and deny you the right to live by your conscience, something guaranteed to us by the US Constitution.

It is about government sponsored blackmail vs your right to informed consent for risky medical products. Informed consent is the bedrock principle of ethical medicine since the end of World War II and the exposure of Nazi medical experiments.

If you are risk-aware, if you’ve followed this bill, you know all this. But most Oregonians still know nothing about what this bill proposes to do, because the media has been using fear of measles to drive the agenda written into this bill.

Over the past decade, the total number of children who died from measles in the U.S. stands in single numbers.  But there have been many tens of thousands of vaccine reactions, hospitalizations, injuries and deaths reported during that time. The people pushing this immoral bill either don’t know or don’t care.

The fact of it is, a healthy unvaccinated child is a threat to no one except Big Pharma and its medical distribution system.  In a rational society, this bill would never be introduced.  How have we the people become so fearful of one another? In the age of information, it’s the narrative.

The combined might of politics and press has shown that it has the power to take healthy unvaccinated and partially vaccinated children and turn them into a hated and feared minority that should not be allowed into the public space. I know that’s hard to believe. And yet, there it is.

Truth to tell, our Southern Oregon media outlets have played their part in the relentless one sided propaganda war against what they all like to call “anti-vaxxers.” That’s the pejorative term they use for family and friends of vaccine injured children & people with vaccine risk awareness.

They lecture us about our social obligation to the immunocompromised who can’t be vaccinated. But they show little care about children already vaccine injured or killed, nor curiosity to understand why.

I find it deeply ironic that it’s you and I who are labeled “anti-science” when the media and the medical establishment refuse to acknowledge and investigate the clear evidence that there is a lack of safety and integrity in vaccine science!

All the propaganda has created a double standard for many people who should know better. People who say BELIEVE WOMEN, unless she says her child was vaccine injured.

People that readily admit that BIG PHARMA is the most corrupt industry on the planet, except when it comes to their vaccines, which must surely be made from fairy dust and rainbows by a legion of angels riding unicorns.

I know I don’t need to tell you that we have high herd immunity rates, and our current public health measures appear to be working, that there is no emergency.

I don’t need to tell you that this bill would make our already struggling public schools lose money and public support as our friends and neighbors refuse to submit and instead take their talent, their businesses and tax money and leave our state.

I know I don’t need to tell you that the sponsors of this bill want social isolation for many of our children, a sure recipe for substance abuse and suicide. If you’re for vaccines but against discrimination, you have to be against this awful bill, HB3063.

I don’t need to tell any of these things to you, but you need to tell the Senators in Salem who will be voting on this. All of them. And the governor too.  She has indicated her eagerness to sign this horrible bill.  he needs to know there is a social cost, and a political cost.

WE DO NOT CONSENT, and WE ARE NOT GOING AWAY. We want to KILL THIS BILL. And you know what drives us?  We see the writing on the wall. We see the slippery slope. We know that somewhere in New York, they’ve been going door to door to check vaccination status.

Connecticut, Vermont, Maine and others have been fighting this battle too, with bills eerily similar or identical to HB3063. It’s a full court press from the drug industry and it’s medical distribution system, and they are highly trained in lobbying lawmakers.

But they don’t have what we have. What we have is authentic people power. When enough good people care and push back, bad legislation can be stopped, as we saw in Colorado. The damage can be mitigated, as we saw in Washington.

I know that some days it may seem like dark forces have the upper hand.  But I take it on faith that truth and justice is the American way.

That includes the Senators voting on this. They need to hear from each of you.  The hour is getting late. When you go home, make calls. Send emails. Be relentless. Tell them NO to a turn towards the darkness of segregation. Tell them NO to an attack on our schools and teachers and small businesses. Tell them NO to HB3063. Tell them to KILL THIS BILL.

And remember to send a thank you to those who stand with us, our courageous local lawmakers like Jeff Golden and Pam Marsh, who resisted the intense pressures of their own party leaders to stand up and speak out for what is right.

In this polar time, this hateful bill is bringing diverse people together across political, economic and cultural lines. I’m happy to be a part of that. I’m happy to stand here in community with all of you. Let’s get this done for the sake of our children and their future, for the sake of our community and this state of Oregon that we know and love.

Thank you and God Bless You.