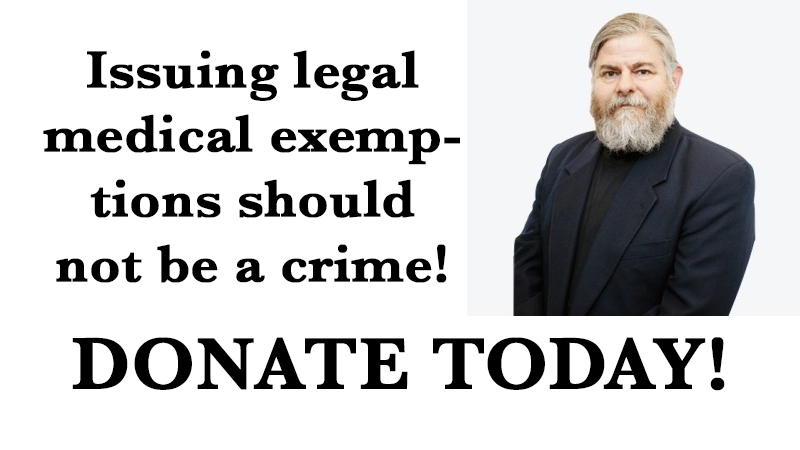 GoFundMe SHUT DOWN Dr. Kenneth P Stoller’s fundraiser this morning. GoFundMe says he will get the funds raised.

Attorney Rick Jaffe has set up a new fundraiser on a new platform. $60K is still needed for Dr. Stoller’s defense against a CRIMINAL INVESTIGATION that the medical exemptions he issued are ILLEGAL.

To all persons concerned about vaccine issues, personal freedom and the First Amendment:

Friday evening, I, Rick Jaffe, a health care attorney for thirty plus years, started a gofundme campaign for a client, Dr. Ken Stoller, who had been served with an investigatative subpeona by the San Francisco City Attorney’s office requesting his medical records for every child for whom he issued a medical exemption from vaccines under SB 277.

We were honored that we received over $40,000 in contributions from over 600 people between Friday evening and this morning (Wednesday May 15th) and dozens of positive comments about Dr. Stoller.

I had seen on a FB page that one of the rabid pro-vaxxer had filed a complaint against the campaign. And probably not coincidentially, I was notified by gofundme (sometimes if we agree with what you’re saying) put a hold on the funds raised. There had been some communications back and forth, but I was just notified that gofundmesometimes (which is what it should now be called), removed the campaign, but stated that the collected donations would be paid.

I was probably naive in thinking that since this was just a legal defense fund about whether a municipality could access medical records, it would be immune from the whole vaccine fake news, misinformation and the rest of the crap being spread in the media. Well, I guess I was wrong.

So, I’ve moved the funding campaign to this site, which I’m told is better and doesn’t engage in censorship. I hope that’s right.

Many thanks for your support. It’s heartwarnimg and somewhat humbling, and alittle weighty.

To recap from the prior campaign:

On May 8th, the San Francisco City Attorney issued a subpoena Dr. Ken Stoller for all his medical records for all vaccine exemptions he has written.

The City’s Attorney’s action has been widely publicized in the California press and TV media, and and nationally, so far in the Wall Street Journal and the Daily Beast.

Here is the LA Times about the case.
https://www.latimes.com/local/california/la-me-vaccines-herrera-stoller-exemption-20190508-story.html

I haven’t found a single direct precedent for a government agency using a public nuisance theory on which to base an investigation seeking medical records for a possible public nuisance violation. I have seen a legal professor advocate using public nuisance as a basis to directly challenge families with PBEs/religious exemptions, but that hasn’t turned into a case, so far as I can tell. Maybe the City Attorney thinks going after a physician is an easier target.

One thing I’m fairly confident about: If they get away with it here, expect this to play at a theater near you soon, since every state, save West Virginia and Mississippi has physicians writing medical exemptions.

The other issue of concern is that there does not appear to be any evidence that Dr. Stoller or any of the other exemption writing doctors have engaged in fraudulent exemption writing. It all seems to stem from Senator Pan’s unsupported allegations to sell CA SB 276 [a bill in California that will obliterate 99.9% of all past, present and future medical exemptions]. They can’t be getting exemption information from the schools because the records are federally privacy protected under FERPA. It’s unlikely that any of Dr. Stoller’s patients have turned over medical records, so a fair question, which hopefully will be asked, is what is the specific factual basis of the investigation?

Finally, to families who received medical exemptions from Dr. Stoller, no action in terms of compliance with the subpeona will be taken without first informing you. Despite the fact that the subpoena seeks the redaction of personal identifying information, there are still California constitutional privacy issues affecting the patients, which will be discussed at a different time and place. It is possible that some of these families may come forward publicly in some protected forum.

Please SHARE this page and campaign – Dr. Stoller must have the funds to stop this insane *CRIMINAL* investigation because if he loses, ALL MEDICAL EXEMPTIONS ACROSS THE ENTIRE USA WILL BE IN JEOPARDY. This is extremely serious. Please donate and share!