Escape California, Vote Republican and How I Pissed Off Anti-Vaxxers 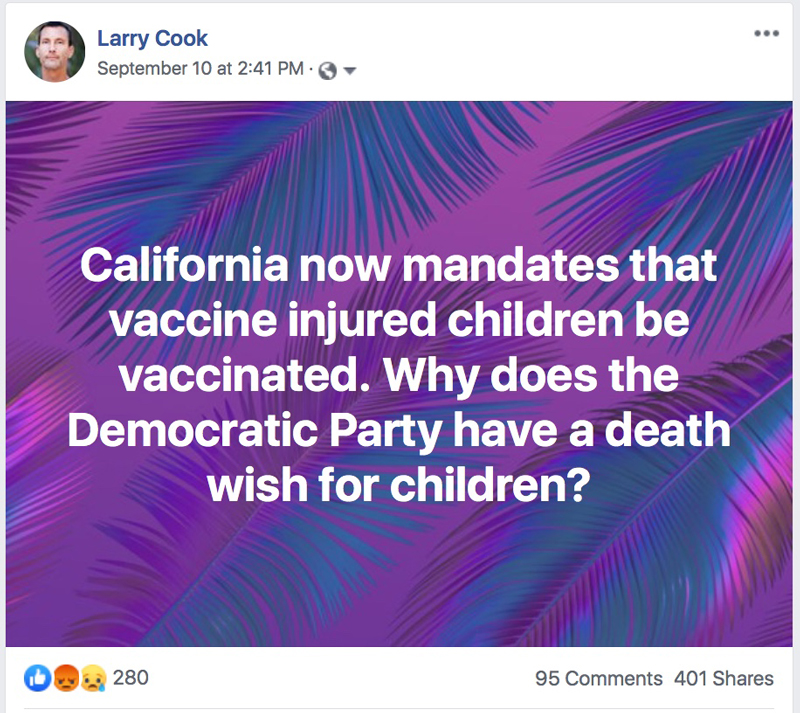 I predicted this two years ago – see the above screenshots (linked to a post on my facebook timeline).

Over the last couple of days – while on Facebook – I’ve posted a couple/few dozen posts that have irked and pissed off some anti-vaxxers. But first, a bit of backstory. When senator Pan introduced SB277 and I got involved, my view of the situation was that this was not an isolated incident and rather, it was just the beginning, especially when I took AB2109 into account (Pan’s bill-to-law that required parents to talk to a doctor to get an exemption). So, rather than focus on SB277 only, I decided to focus on the concept of mandatory vaccination and that is how Stop Mandatory Vaccination was born. My analysis of the situation proved to be correct: SB277 was the big entryway into launching vaccine mandate legislation throughout the USA, and perhaps even the world.

For the first 2.5 years I dived deep into the topic, watched vaccine mandate bills be introduced, listened to and followed other activists and checked out what the media was saying. Based on all of that and talking with Doctors in the movement, I made the prediction over 2 years ago in social media that medical exemptions as we know them in California would come to an end (see screenshots above). And they have.

Was this due to a lack of effort by concerned citizens and parents who could not educate legislators about vaccine death and injury and medically fragile children? Did they somehow not say the “right things” to their elected officials? No, it’s none of that. Everyone has acted valiantly in their discussion with elected officials, that I am sure. And, that was 100% required and expected as well.

So, what is the COMMON THREAD here? The common thread is that the vaccine mandate push is primarily being led by the Democratic Party while the Republican Party has been opposing this push to force vaccinate every man, woman and child.

But our legislative system operates on majority vote, so, when there is a majority of Democrats running the show in a state and a MAJORITY of them are going to vote for vaccine mandates because they are voting for an agenda, what’s the solution? More “education?” AB2109 > SB277 > SB267 & SB714 > yes, HOMESCHOOLERS are next. And then adults. >>> No, the solution is not “more education” (that’s not to say we should not try); the solution is to vote for those who we know have a high probability of opposing vaccine mandates, and that’s REPUBLICAN.

Plenty of people who are diehard Democrats don’t like this one bit. They bring up all sorts of arguments against the Republican Party. Well, that’s fine, they can vote Democrat, but the writing is on the wall and there is no denying that the Democratic Party, as a whole, is driving the vaccine mandate agenda. The few loner Democrats voting against party line will shrink, not increase. We’ve seen this over and over again.

So, yes, I absolutely believe we need to vote Republican to slow down the vaccine mandate agenda.

California: So, the LA Times has already begun their crusade against families who are vaccine free and homeschool. To think that somehow the Democrats who voted in favor of AB2109, SB277, SB276 & SB714 are all of the sudden going to vote to allow homeschoolers to remain vaccine free is crazy making to me. These Democrats are AGENDA DRIVEN. They are not going to listen to their constituents, a homeschooler lobby, or anyone else. They have proven that their allegiance is to the vaccine industry. REPEATEDLY.

So yes, I highly recommend that everyone who can get out of California do so as soon as possible or at the very least, have some plans in place for when legislation is introduced targeting homeschoolers. As an aside, I have seen numerous, numerous posts and comments by parents who have moved and are very happy they did. Is it easy? No. But will life be easier in a Republican held state? Most likely.

We are at war with forces who plan ahead DECADES. Few good people can think ahead more than a year or two, and certainly have no conception of how evil forces strategically plan for decades to create an enslaved race. It won’t stop with homeschoolers – we all know adults are the main target here. But, getting to higher ground during a flood is wise action, not defeat.

We are fighting a huge war here and I assure you it’s going to get much worse. Much, much worse. So PRAY BIG, educate others and protect your family and your kids from tyrannical government and bully doctors.

Don’t shoot the Messenger – I see the writing on the wall – as has many others – and am trying to help everyone stay safe with plans of action that will make a difference.

By Sylvia Marie on the above thread on Facebook:

And let me tell you about our experience with AB 2109…

Back in 2012 when this bill was released, most in the vaccine injured and health freedom communities were pretty apathetic about it. They thought the bill would present another hoop to jump thru, but that the exemptions themselves would never go anywhere. There was a relatively small group of us in the Sacramento area – Dawn Winkler (lived furthest away but visited the Capitol and stayed at my house frequently), Laura Hayes, Michelle Gutierrez and some others I won’t name. We had contact with other small groups of people up and down the state that were actively paying attention to vaccine issues. We knew that the AMA and AAP were openly advertising that their top lobbying efforts were geared towards removing all exemption laws in the country.

So when AB2109 was released, we screamed from the rooftops that this was the “testing of the waters” for vaccine exemption bills, and that we needed a very strong response. We got very little support. We were connected with various groups – such as for me, I was at that time an active volunteer for six autism orgs, plus I had just signed on to volunteer for a political action group for health freedom. All the other gals had their own contacts and groups. Between all of us, we sent action alerts all over. Yet very few people showed up to hearings and rallies. Even fewer even called their legislators.

But what we found was this: we made appointments with as many offices as we could, and back then it was a lot easier to get appointments. For the rest, we made “cold calls” just walking in and hoping to talk to staff. Sometimes we even managed to catch the Assembly Person or Senator themselves. We ended up talking to every single office.

And the Republicans were at first inclined to support AB 2109. But we explained our position and why that bill was an attack on parental rights. Soon, we got support from every Republican except for maybe one or two (can’t remember now). But had we not done the work we did, it would have passed with full support, which is horrible to even think about.

The Democrats were a different story: they were smug, dismissive and condescending. They flat out told many of us to our faces that parental rights did not matter to them, that THEY, the Legislators, were the ones to decide what medical procedures OUR children would be subjected to.

And that has been my experience since the begging of my Vaccine Freedom advocacy that I begun around the year 2000/2001; the Democrats spit on parental rights, the Republicans support parental rights. It really is that simple.

But the other side of the sword is that the Democrats are all about BIG GOVERNMENT. And the CDC, and all the bloated county health departments in this state ARE the epitome of Big Government. Giving them the power over our lives, and the lives of our children, is what they believe in whole-heartedly.

When I hear people say it isn’t a Dem or Republican issue, I know the person saying that has not been in the trenches in political activism – or even had the most basic interaction with their own district representatives. Because if they have been involved, there is absolutely no doubt who is on our side, and who is not. AB 2109 was released just a few weeks after the only Republican Governor this state will ever see again left office – Arnold Schwarzenegger. Once he was out, the Dems controlled the state, and it was ON. Yet how many in the vaccine injured community voted for Pan, Atkins, DeLeon and all the other monsters who destroyed our rights since Arnold left office? Because they were believing in a false narrative of “progressive values”.

And here we are. Forced Vaccination, brought by none other than the Democrat Party. 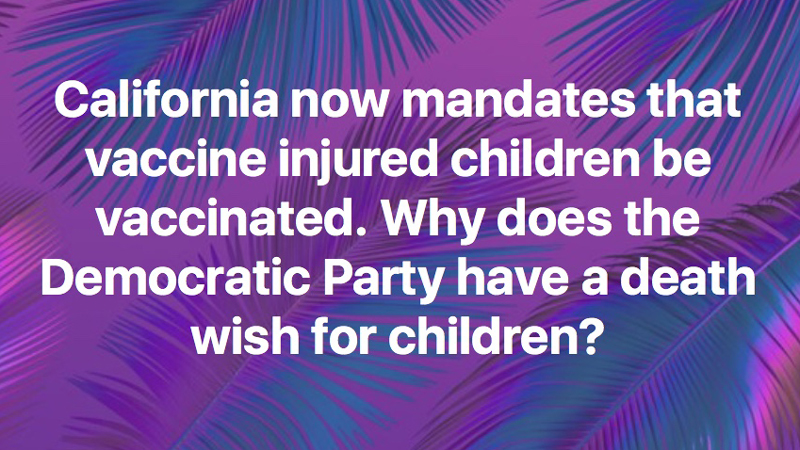