Larry Cook June 5, 2016 June 5, 2016VAXXED
Thanks for subscribing! You can unsubscribe at any time.
Share with your friends...

Del Bigtree, producer of the documentary Vaxxed: From Cover-Up to Catastrophe, says, “We have more 1-day infant deaths than every other industrialized nation in the world.” And he attributes this in part to the vaccines that infants get on their first day of life. He also explains how the CDC has covered up a study that shows that the MMR vaccine causes Autism, based on the age of when the MMR vaccine is administered. For the full story of CDC corruption as explained by senior scientist William Thompson, manipulation of vaccine safety data, and how vaccines are destroying our children, watch Bigtree’s documentary.

Here’s why the story of Doctor William Thompson at the CDC is so important. The MMR autism study was the last study ever done at the CDC, the Centers for Disease Control, looking at the connection between vaccines and autism. This was the study that stopped all funding from the government of the United States to research do vaccines cause autism. If you think of the importance of this study and then you think this is the study where Doctor William Thompson, one of the senior scientists at the Centers for Disease Control, he stepped forward and said, “We manipulated the data on this study. We omitted data and we threw data out to hide the fact that we saw a causal link between the MMR vaccine and autism.”

Specifically this study was looking at the age that children receive the MMR. The theory that was being questioned is the earlier you receive the vaccine, does that make you more likely to be diagnosed with autism? That’s exactly what they found in 2 specific groups. In the African-American group, they found that there was a 2.64 increase in autism if a child got the vaccine between 12 and 18 months, versus if they’d waited till after 3 years old. Then there was isolated autism. These were children that had, they had isolated autism out meaning autism was the only issue they had. They didn’t have epilepsy or other co-morbid issues. These were perfectly healthy children for the first year of life.

Then after 1 year, they had environmental impact right at the time they would have received the MMR vaccine and they declined into autism. These children, this includes every single race, and what they found was there was up to a 7 times increase in the risk of autism if one of these healthy children got the vaccine between 12 to 18 months versus after 3 years old. Now people will say, “Well, what about all of the other studies that proved that vaccines are safe?” I would say this. This is the most important study. This is also the most important health agency in the world, the CDC, the Centers for Disease Control.

If you look at your newspapers, you watch the news, the WHO always refers to the CDC. The CDC is the most important body. We have to ask ourselves a couple of questions. If they’ve committed fraud on the MMR autism study, what other studies have they committed fraud on? This is obviously a pattern of behavior, and if you see Vaxxed, you’ll see that it doesn’t just exist inside of these 5 scientists doing the study. It goes all the way to the head of the CDC, Doctor Julie Gerberding. If the CDC is committing fraud and has gotten away with it for over 10 years, how can we look at all of these other studies and not assume that the same thing is taking place, especially when you look at the fact that many of these other studies are coming from universities that we know are getting funding from the pharmaceutical industry?

It’s very hard to track the funding from the pharmaceutical industry into the CDC, that we see people leaving jobs from the CDC and then going and working for the pharmaceutical industry just like Julie Gerberding who was the head of the CDC at the time of the MMR study, which was made by Merck. The MMR is made by the company Merck. After this study was over a few years later, Julie Gerberding got a job at Merck as head of their vaccine department, a multi-million dollar job. When you see that sort of cross-contamination at CDC, you have to assume that there’s some sort of connection going on there.

That, we know, is happening to CDC, but all of these other studies, clearly, we see the funding going to the universities that were coming out with these studies. We have to question how far of a reach does the pharmaceutical industry have into all of our testing. Then if you think about the fact that something like a vaxxed versus unvaxxed study which is the most important study we need to do, those studies are being done, studies like that are being done and they can’t get published into any of the medical journals. Why is that? Again, we can see that the pharmaceutical industry is affecting the medical journals.

How do we change this? How do we get real safety studies being done? We’ve got to create an independent safety study body that is firewalled against the pharmaceutical industry so that we can make sure every single vaccine is safe. It’s imperative. This is something we’re injecting into our children, into our babies. We inject a Hep B vaccine into a 1-day-old infant. I just found out 4 days ago that CBS just ran a story saying that we now have more 1-day infant deaths than every other industrialized nation in the world. In fact, we have 50% more babies die on the first day of life than all of the other industrialized nations combined

You have to ask yourself why would that be when we have the best medical system in the world. When you ask yourself that question, look at the fact, we are one of the only countries that inject a vaccine of a sexually transmitted disease into a 1-day-old baby. “Hello, welcome to the world, take your first breath and here’s your first sexually transmitted disease.” It doesn’t make sense. We need a scientific body that starts making much more sense because we can no longer trust the CDC. They have failed the United States of America. If you want to learn more, see the movie Vaxxed, and visit our website vaxxedthemovie.com where you can get all of the information about this and other issues around vaccines. 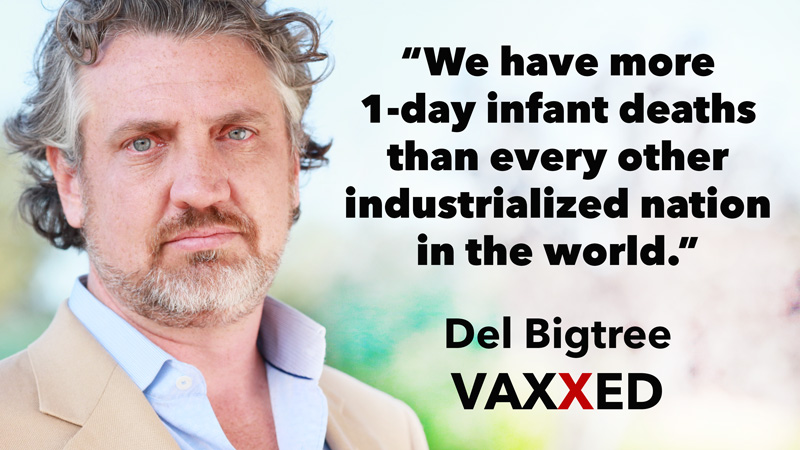