“The child had had the vaccine, had developed a very high fever, had started screaming, had then gone to sleep for days on end, and woken up never the same… A clear history of a disease process.”

Dr. Andrew Wakefield describes the study that was published in The Lancet – later retracted – that looked at the MMR vaccine, children with autism and their gastrointestinal disease.

Although not discussed in this video, Dr. Wakefield had found that the MMR combo vaccine contributed to the problems in autistic children, and he had recommended at the time that the MMR combo vaccine be administered separately. This sparked a worldwide concern about the MMR vaccine, a drop in vaccination, concern that the MMR vaccine causes autism, and ultimately a relentless attack on Dr. Wakefield that cost him his medical license and reputation because he questioned vaccine safety.

I just wanna talk very briefly about the Lancet Paper. It’s a, The Lancet Paper was a case series study that was published in 1998. There were thirteen authors, including some of the world’s leading experts in their fields. Including Professor John Walker-Smith, a pediatric gastroenterologist. Who, was perhaps the world leader in his field at that time. He wrote the textbook that instructed pediatric gastroenterologists, even today. So a very eminent man who’d come close to the end of his career. Unimpeachable, I mean. A man of the greatest integrity, who led the team clinicly.

And what happened was, in 1995, parents started contacting me saying “My child was developing perfectly normally, they had their MMR vaccine on time, and then they became very drowsy, they started screaming, they slept for days, and they were never the same again.” All of the skills they’d acquired, disappeared. Their speech, language, interaction with their siblings. All went. And they were ultimately diagnosed with autism.

And they had come to me because their children had unexplained gastrointestinal symptoms. Diarrhea, constipation, failure to thrive, abdominal distention, pain. They couldn’t speak anymore, many of them. But the mothers knew that they were suffering pain. These children would injure themselves, smash their head against the wall. They had violent outbursts against other people. And this was a manifestation of their pain.

But doctors had said all of this is just part of autism, forget it and move on. But it wasn’t. It was quite clearly an organic disease until proven otherwise. And its a golden rule of medicine, that you do not ascribe something to a psychological or behavioral origin until you’ve excluded every other possibility. If you do, then you will not be serving your patients.

So, we got together a team of doctors, And we decided that we should thoroughly investigate these children. John Walker-Smith led that investigation. The children underwent investigation, for the purpose of diagnosing, the origin of their symptoms, and that’s what happened. They had an inflammatory bowel disease. The parents were right, the medical profession had been wrong.

Now you could argue that the behavioral symptoms got better cuz they were out of pain. They just felt better. But there was more to it than that. They started speaking again. They started using words they’d stopped using three, four years ago. And that was much more than just a child feeling better. They started smiling and laughing and interacting. And that was a, the beginning of a very very interesting journey. So the parents had been right about the bowel disease. The medical profession had been wrong.

So when the parents said “My child regressed in the face of an MMR vaccine.” Then we had a very very clear commitment to investigating that as thoroughly as possible. It could not be dismissed as coincidence. And more than that, it was a continuum of problem. It wasn’t that they had the vaccine, and then they had autism.

And therefore the two were coincidental in the minds of many people. The child had had the vaccine, had developed a very high fever, had started screaming, had then gone to sleep for days on end, and woken up never the same. It was a continuum. It was one thing, leading by degrees, to another. A clear history of a disease process. So we decided that after we had seen, a number of patients. This should be written up. Twelve children. This is so interesting that it should be written up in right. This is called a case series.

So, the way in which human disease syndromes are first described, be they autism or Asperger Syndrome, or Crohn’s Disease, or Aids. It’s usually in a handful of patients, who present with signs and symptoms that are so consistent and so unusual that they merit publication in their own right. You make no claims of causation, you make no, you can’t test hypothesis, all you can do is, this is what the parents tell us, this is what we find, this is what may be going on, more work is needed. And that’s exactly what we did.

And what happens in medicine from that point forward, is you start to design hypothesis testing studies from that point. You start to say “Right. Now, is this bowel disease the same as other bowel diseases we’ve seen before?” Like food allergy, or Crohn’s Disease? Or is it different? Is the vaccine involved and how can we determine that?

So, that flows from the kind of paper the Lancet Paper was. So, the Lancet Paper then became terribly misrepresented, for something it wasn’t. And I think principally Brian Deer in his efforts to, bring us down and to discredit the work, said that the Lancet Paper was paid for by lawyers. For the legal purpose of creating a case against the manufacturers in order to bring down MMR vaccine.

It wasn’t at all. I mean. I was contacted by parents, in May of 1995. It was not for six months that I. Until six months later that I learned there was a possible legal action, and that lawyers were involved, in this issue. And that I was then asked to be an expert in that litigation. So it had nothing whatsoever to do with litigation. It was a clinical response to parental concerns.

And all of this subsequently came out in the English High Court. In John Walker-Smith’s appeal against the General Medical Council and Justice Mitting. And the judge presiding over these hearings, absolutely concurred with our position.

So, it was a very simple study that has been misrepresented, perhaps more than any other paper in the history of the world. And what’s fascinating now is that the commonest, most consistent research finding in autism is the link between the bowel and the brain. Whether it’s Harvard, whether it’s in Poland, whether it’s in Canada or North America. Wherever it is, that is the most consistent finding. And the sadness is, that had we been allowed to continue our work.

And by the time I’d left the role free we’d published maybe 15, 16 papers, characterizing the intestinal disease. But if we’d been allowed to continue that, then we would been, we would have been way ahead now. We would have been able to provide parents not only, with answers to what was happening in their children’s intestines. But how to treat it. And how to make their children better.

And a lot of that has not happened because of the, of the reckless damage done to the research program, in an effort to crush dissent about vaccine safety. 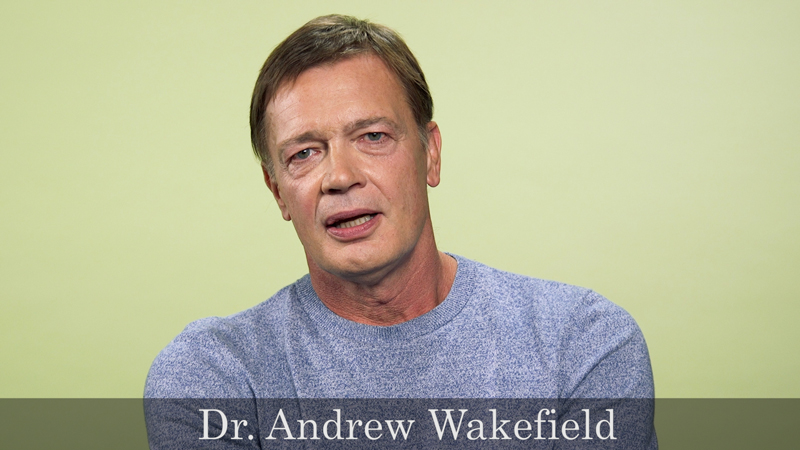