Melissa Curtin October 3, 2018 February 7, 2019Vaccine Death, Vaccine Injury, Vaccine Reaction
Thanks for subscribing! You can unsubscribe at any time.
Share with your friends... 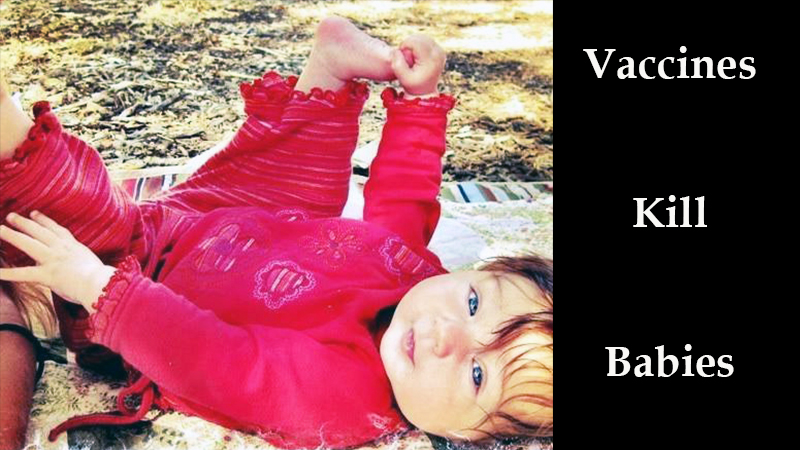 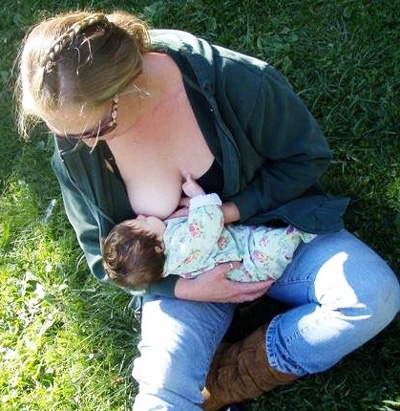 We are nearing a tipping point, a cascading avalanche of undeniable truth, and the harsh bitter reality that infants are regularly killed by vaccines. This is not a myth, an exaggeration, or a magical glitter-filled unicorn fairytale that exists in some other alternate universe. This is happening now, in the town or city you live in, and you probably already know someone with either a vaccine-injured or dead child — and it may be you. Every day someone is suffering the immeasurable loss of a child or knows of one that died after vaccination.

Julia Anne is that mother, the one that experiences such grief and heartache from the loss of her six month old — even after eight years. It’s a life event that will be remembered forever, on every anniversary of this baby girl’s birth and death, and any other family milestone that this precious infant is no longer physically present for. Julia Anne, in her own words, reveals her agonizing experience about of her daughter passing within two days after her vaccines.

We were blessed with a daughter when our son was five-years-old. She was born December 23rd, 2009. She was beautiful — a little doll. When she was born, she had a head full of black hair, and a wise look in her blue eyes. She was so loved – not only by our immediate family, but at the school I own, as well as the Martial Arts studio, where my husband taught. 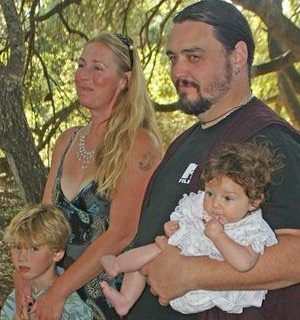 Our daughter was strong, just beginning to crawl, smart, and opinionated. I remember thinking, “Here we go again!” because her brother was spirited as well. She was extremely healthy, alert, and other than her well-checks, never needed to see a doctor.

While I was pregnant, I received vaccines for DTaP (Diphtheria, tetanus, and pertussis), flu, and swine flu. Our daughter was vaccinated according to schedule on time, every time. The only other reaction I remember was from her two-month vaccines, when she cried inconsolably all day, which was extremely unusual for her. She died of “SIDS” [Sudden Infant Death Syndrome] following her six month well baby check up. She had received rotavirus, DTaP, Hib (Haemophilus influenzae type b), PCV (Pneumococcal conjugate vaccine), and IPV (inactivated poliovirus) vaccines.

A couple days later I woke before everyone in the family to get ready for the day. Andi stirred for a moment, I settled her back down to sleep (she usually slept a bit longer in the mornings). She was asleep on a bed, no blankets or pillows. I hauled the trash cans up our driveway, came back down to shower. When I came back to the room to change (15 minutes from when I left her), she was in bed with an arched back, and not breathing.

I started CPR on her and she was actually at my most recent CPR training with me. I called to my husband, and he took over as I called 911. The operator was reassuring as she was giving the instructions that we were already familiar with.

When the first responder came down the driveway, I was relieved. He was a childhood friend of mine and I knew that he would do his best for our little girl. He and his co-workers tried their best. I held our son on my lap, reassuring him as I could, while they worked on his sister. Neighbors came over; the first families were beginning to arrive to school.

We followed the ambulance to the hospital. They tried, they really did. A nurse tried to take our son to a separate room with coloring books and treats that he was completely unfamiliar with. They hugged us in a smothering- not comforting- way, and tried to tell us that it would be ok. I heard them call for a second Epi-Pen.  I knew it was hopeless. My husband and son stood in shock. I hugged my childhood friend, the firefighter, who had come to the hospital. He said, “I’m so sorry,” and walked away.

They let us in to the room. We notified our family. I took the tubes out of my daughter and I cleaned her up as best as I could. We held her. Both my husband and I (we didn’t talk about until afterward) considered taking a family picture, as we hadn’t ever had time to do that. Family came to say good-bye. A dear friend took our son to breakfast with her girls.

And then we had to leave her there. We walked out of the emergency room entrance. I sat on the driveway. My breasts were full of milk and my baby was dead.

My husband drove back to our house with his parents, I asked my parents to drop me off at the restaurant to be with our son. I sat down with them and as the kids ordered breakfast, the waitress asked where the baby was? Our son said, “My sister died today.” In shock, we all nodded at the waitress, who had known me during pregnancy, and our baby from week one. That was our first public acknowledgment.

One of our friends, an medical doctor (MD), met us at home and said, “It’s 2010, and we still don’t know what causes SIDS (Sudden Infant Death Syndrome).” It was a mystery to us at the time. Of course, until we had the official autopsy report with the diagnosis of SIDS, we asked ourselves what we could have done differently, how could this have happened?

No one at the hospital, the coroners, nor her pediatrician, mentioned that vaccines could have been the cause of her death. I had never received a copy of the vaccine insert for myself or my children. It wasn’t until years later that I read the vaccine insert and realized that SIDS is an adverse reaction to the vaccines she received, and by that time she was cremated, and the ability to report her injury had passed. So, yes, we could have done things differently. We could have researched, instead of blindly trusting our doctors. We could have looked at our family medical history, riddled with autoimmune issues (fibromyalgia, rheumatoid arthritis, ulcerative colitis, etc.), and learned that she wasn’t a candidate for vaccines.

We now know that our children cannot tolerate vaccination. Our oldest was vaccinated slowly, and his schedule was not as aggressive. Our Rainbow baby was also vaccinated slowly and only to three years and our littlest has only had the Vitamin K shot. The older two have some health issues and allergies, which we care for holistically, and we are very grateful that our current family doctor has a well-rounded education, which includes not only Western Medicine, but Chinese, Homeopathy, nutrition, etc.

Our family has been forever changed. We had huge support from family and friends, who even grocery shopped for our family, which I was forever grateful for. The times I went to the store, I’d inevitably run into someone who asked, “How’s the baby?” and there we would be crying in the middle of Trader Joe’s. We had a wonderful team at our local hospice with a year of individual counseling for our son, and a Living With Loss parent group for us. And we’ve divorced. 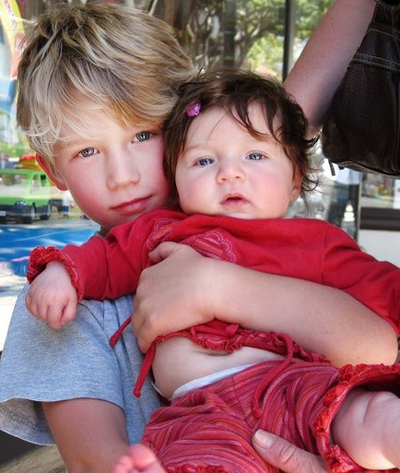 It was particularly hard on our oldest, I think. He was only five at the time, and her loss has affected him in a significant phase of his development. He stopped growing physically for a year after his sister died, and he changed from a spirited wild-child, into a very serious, almost grown-up, person. Our Rainbow boy understands more, now that he is seven, but he feels the loss of his sister deeply. He went through a time at about three-years-old, when upon meeting new people (what’s your name? Do you have siblings?, etc.), he would say, “I have a big brother, but my big sister died.”  Which of course led to uncomfortable conversations with strangers.

Personally, I take two days a year off, December 23rd, and July 7th. In the days leading up to them, I feel the sadness growing, and sometimes I can feel my heart physically break again. I have learned that those are my days to remember and to grieve.

My ex-husband and I have found peace. We live close to each other and share custody of the boys. We each have a solid partner and our families have blended well. I am grateful that the boys have a second mom and a second dad, who love and appreciate them, and who are more than supportive of our co-parenting.

I share our story because I would like to encourage others to research first. There is plenty of information on the CDC website, on the vaccine inserts themselves, that we were unaware of. If we had known the risks for our children, and with our family history, we would have been able to make an informed decision instead of being uneducated and blind-sided. It didn’t take long for me to read the material, once I knew where to look. Just as we would research anything, from car seat safety to first foods, I encourage you to research vaccines.

Family after family, parent after parent, comes forward to tell their harrowing story of the unmistakable tragic loss of their infant from vaccines. Parents either recognize the vaccine injury connection immediately following their child’s death, or sometimes it takes months and years to research, investigate, and integrate input from doctors, nurses, coroners, and autopsy reports, learn from other families’ horrific losses, or regretfully, another vaccine-injury occurs with their next child, family member, or for them.

Often the causal relationship between losing a child directly after their recent vaccines is hidden, is not known, becomes taboo, and is hardly spoken about or readily disclosed by doctors. It’s the mothers, the fathers, caregivers, and guardians, that recognize and know the morbid vaccine connection and who are aware of vaccine injury reactions. It’s the vulnerable renegade doctors, nurses, and other medical and health professionals that acknowledge this obvious pattern of the same story, similar symptoms and reactions, and risk losing their licenses to rise up to speak up and warn others.

It’s time to listen. It’s time to wake up. Your child’s life is not a dress rehearsal. There are no do-overs. Heed the warning. Set aside the cognitive dissonance that death from vaccines can’t happen as often as it does, because it most certainly does. Often. It’s disturbingly unfortunate — and these tragedies need to stop. Our hearts and prayers go out to all the families affected by the horrors of losing their children following vaccines. We thank Julia Anne for sharing her story and experience with us.

Please leave your condolences below.