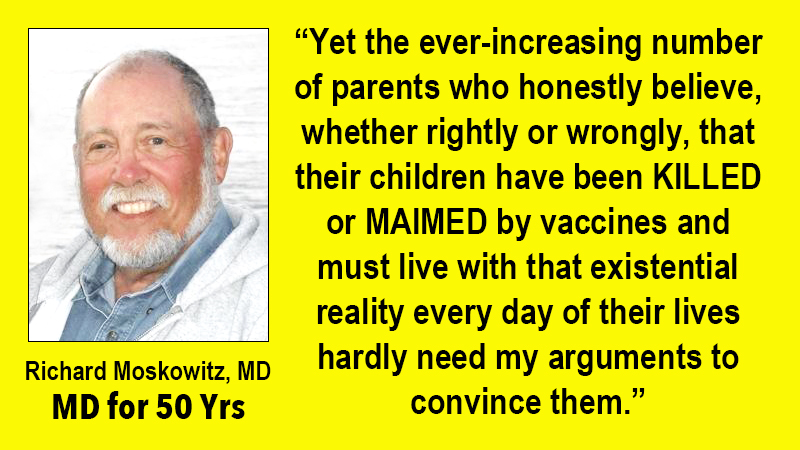 By Dr. Richard Moskowitz, MD
Author of Vaccines: a Reappraisal (a must-read!)

Before responding to the editorial, “How to Inoculate against Anti-Vaxxers” (January 20, 2019), I want to point out that the opposite term, “Pro-vaxxer,” is rarely seen or heard, as if belief in the safety and efficacy of vaccines were so universal and such a no-brainer that there would be no need to coin a word to single it out, much less imply that the naysayers might also have a valid point of view. This subtext is evident throughout the editorial in question, which merely accepts as gospel the authority of the World Health Organization on the subject, as if there were nothing more to be said, other than how to combat those with the temerity to question it.

The obvious corollary is that the epithet “anti-vaxxer” is pejorative, but another less obvious is that it’s inaccurate, since most of the thousands upon thousands of parents who must live with their conviction that their kids were killed or irreversibly damaged by vaccines are not against all vaccines on principle, but simply have questions and doubts about them, want them to be made safer, and above all seek some public recognition of and validation for the truth of their experience, including their right to choose not to continue vaccinating in the future.

As a family doctor with fifty years of experience caring for many such families, I cannot remain silent about the enormous weight of vaccine-related suffering and disability, sufficient to break any heart, that continues unabated, remains largely hidden and unacknowledged, and cries out at the very least for caution, restraint, and simple compassion for the viewpoint of those whose lived experience, whatever may have caused it, is so tragically different from that of everyone else privileged enough to be ignorant of or somehow unmoved by their loss.

When these tragedies do occur, they are almost always dismissed by their doctors, friends, and relatives alike as coincidental or the result of some genetic defect, unfortunate to be sure, but in no way related to the vaccine or vaccines that more or less recently preceded them. This amounts to saying that these parents are either lying, ignorant, or stupid, and that modern science knows what really happened to their kids better than what they have actually experienced and lived through, and that the science of vaccines is settled beyond any reasonable doubt.

Which brings me to my second reason for writing, namely, to remind your readers that questioning and doubting are at the heart of the scientific endeavor, that science by definition must never be “settled.” The late Richard Feynman of Caltech, a Nobel Laureate in Physics, said it best:

There is no learning without having to pose a question, and a question requires doubt. Before you begin an experiment, you must not know the answer. If you already know the answer, there is no need to gather any evidence; and to judge the evidence, you must take all of it, not just the parts you like. That’s a responsibility that scientists feel toward each other, a kind of morality.1

In addition to the tragic experience of so many families, here are a few more equally important reasons put forth by prominent physicians and scientists to cast doubt on the standard orthodoxy that vaccines are uniformly safe and effective:

1)  even the CDC now admits that supposedly vaccine-preventable diseases are being spread primarily by vaccinated individuals;2

2) the small outbreaks now occurring are predominantly in vaccinated individuals;3

3) many vaccines have led to the emergence of new, resistant strains of the same organisms that we vaccinate against, as well as altogether new species in some cases;4

4)  children coming down with and recovering from acute febrile illnesses like flu, measles, mumps, rubella, and chickenpox are much less likely to develop chronic autoimmune diseases and cancers later in life than those who are vaccinated against them;5

5) vaccine safety studies are conducted primarily by the drug industry itself, or by government agencies that are run mainly by past, present, or future executives of the industry, in lieu of the independent regulation and oversight they are supposed to provide;6

6) these studies rarely include unvaccinated subjects as “controls,” and typically give other vaccines or toxic chemical adjuvants instead of genuine placebos for comparison;7

7)  adverse reactions are accepted as vaccine-related only if they occur within a few hours or days of the vaccination, thus arbitrarily excluding the chronic dimension entirely from consideration;8

8) the lead investigator has absolute authority to decide whether unsolicited reports of other adverse reactions by the subjects themselves are or are not vaccine-related, based on criteria that are never specified and allowed to remain a trade secret, if indeed they exist at all;9

9) the risks of adverse reactions to vaccines are directly proportional to the total number of vaccine components both administered simultaneously at a single visit, and accumulated over the patients’ lifetime, which means that they are inherentin the vaccination process per se, as well as in this or that particular vaccine;10

10)  many vaccines contain chemical adjuvants and other ingredients known to be neurotoxic, such as aluminum, mercury, and detergents like Polysorbate 80, which when injected are known to cross the blood-brain barrier, accumulate in brain tissue, and have been causally linked to various forms of brain damage;11

11) the CDC admits that over 25% of American children born today suffer from some form of brain damage, yet has never investigated, or even shown much interest in investigating, what percentage of these cases are vaccine-related;12

12) other vaccine ingredients include human and animal cells, DNA, RNA, and proteins, which almost certainly provoke immunological reactions but have not been studied, or at any rate such studies have never been made public.13

The Helsinki Declaration on the rights of experimental subjects and the Nuremberg Code of human rights, both devised in the wake of Nazi atrocities during World War II, repeatedly emphasize the right of every individual patient or experimental subject to fully-informed consent prior to any medical procedure, with very rare exceptions, such as an imminent public health emergency.14But routine childhood and adult vaccinations are mandated purely as a matter of policy, to prevent a possible disease in the future that most people would never have acquired, in many cases would recover from if they did, and is actually being spread to a great extent by the vaccination process itself.

Most doctors nevertheless continue to believe what the CDC tells them, that vaccines are uniformly safe and effective, even though the Supreme Court has ruled that they are inherently unsafe, in order to shield them and the industry from legal liability for the injuries that they cause, to which every other industry is subject. This, I submit, is not science, but scientism, a blind dogmatism and quasi-religious faith that whatever passes for science at the moment is the absolute truth, beyond question or doubt, to which everyone must pledge allegiance, the main result of which is to stifle the critical thinking, questioning, and doubting of seemingly settled truths that real science requires.

For all of these reasons, most parents who must live with the conviction that their kids were killed or maimed by vaccines, like the physicians who care for them, the lawyers who advocate for them, the independent scientists who study the phenomenon, and the journalists who question the official line, all of whom are regularly lumped together and stigmatized as “anti-vaxxers,” ask for nothing more radical than the following:

1) that the best scientists be recruited independently of the drug industry or the government agencies they control to investigate both the individual vaccines and the vaccination process in general, paying particular attention to effectiveness and safety, including their possible contribution to chronic diseases; to their exact mechanism of action; to the role of individual vaccine ingredients: adjuvants, preservatives, disinfectants, detergents, foreign DNA and proteins, contaminant viruses; and to the emergence of resistant strains of the original viruses and bacteria we vaccinate against; and

2) that vaccines simply be made optional for those who want them, after fully informed of their risks, rather than mandatory.

In conclusion, I am content to repeat what Professor Mary Holland of NYU Law School has observed, that “a sizable number of developed countries in Europe, North America, and Asia that have relaxed such mandates have not only escaped any major health problems as a result, but have recorded consistently lower infant mortality rates and scored better on other standard health measures as well, without cruelly forcing parents to choose between educating their children and refusing to vaccinate them.”15

I am of course well aware that even questioning these mandates places me beyond the pale of what most people sincerely and devoutly believe, backed up by the full weight of opinion from established authorities such as the CDC, the American Academy of Pediatrics, and the vast preponderance of the medical community as a whole. So I can well understand why many parents who conscientiously vaccinate their kids with no hesitation or soul-searching, and doctors who are deeply committed to the scientific worldview, as I am, perhaps roll their eyes at my presuming to question the wisdom of a procedure that has won broad acclaim as among the best that modern medicine has to offer.

Yet the ever-increasing number of parents who honestly believe, whether rightly or wrongly, that their children have been killed or maimed by vaccines and must live with that existential reality every day of their lives hardly need my arguments to convince them. That is why I will feel well rewarded if my words, my reasoning, and the commingled sadness, fear, and outrage I have long felt about this subject will help to promote a healthy debate and to elicit more of the rigorous scientific work that still needs to be done.

I am a Family physician, semi-retired, living and working in the Boston area, and the author of Vaccines: a Reappraisal, Skyhorse Publishing, New York, 2017, from which all citations are taken. 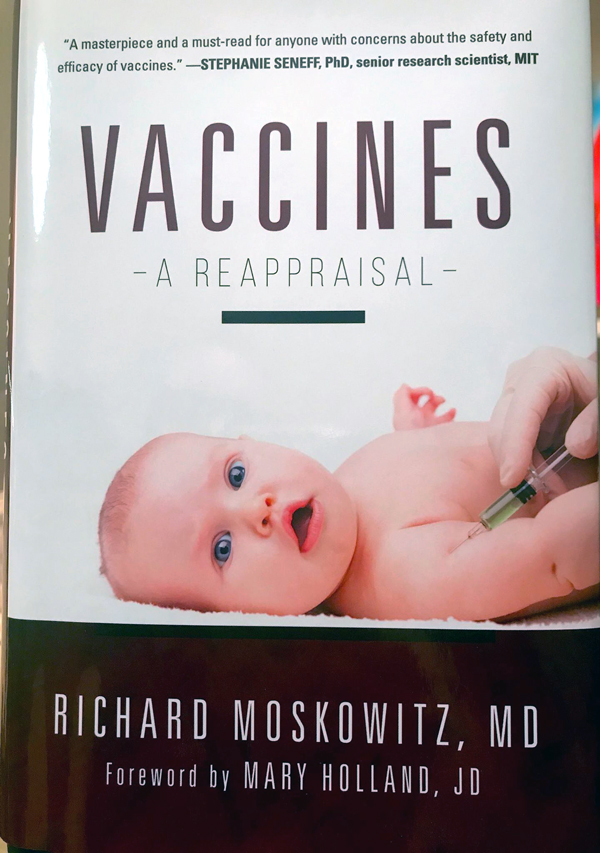