Good evening YouTube. This is our future and the power’s with the people. Just want to let you know, I am a respiratory therapist. I’ve been doing this for 21 years. I’ve been kind of all over the place doing this. I wanted to show you our equipment room here. So, we want to talk about COVID-19 for a few minutes, and the first thing I want to say is, does it look like there’s a ventilator shortage? There’s not. As a matter of fact, we’re running less ventilators right now than we would normally run, and that’s because people are just staying home. They’re not having elected surgeries.

I want to talk about the numbers and the criteria that goes into what a COVID patient is or a patient under investigation, what’s also called a PUI. Basically right now, and the way it has been the last couple of months when they locked us down, is that any patient that came in with a respiratory problem was labeled COVID.

Now, that doesn’t matter if you got stage IV lung cancer and pancreatitis and heart disease and liver failure and everything else. You’re still, because you come in with breathing problems, you’re labeled a COVID patient. Now, we have one lady that could do the testing at first, those tests went to the CDC. Only one person was qualified to test that for the whole place. So, several of these patients under investigations were never tested and maybe they died or whatever. Then they would die of COVID and not of stage IV lung cancer or these things. This is clear that this is what’s come out. Every single patient that needs one of our pieces of equipment here, any of this, if they need any of this stuff. Okay, then they are a rule out COVID and these tests have taken as long as two or three weeks to get back.

We’re finally getting what they claim. They’ve been claiming this for a month, but we’re finally getting in-house testing that’s going to change the game. And I think that’s what’s going on at most places. And what that also means is now you’re going to see the numbers either go up or go down. And I would suspect we’re going to see them spike up and then spike down real quick and this is the reason for the number of deaths. So, you have to recognize that if every single patient is under COVID investigation and dies, then that goes into a COVID death and they’re showing the numbers like a football game to scare you. They’re showing you loading bodies into a tractor trailer to scare you. I’ve never in my career ever seen bodies loaded into a tractor trailer. It just doesn’t happen. I wonder if those were even bodies. I really don’t believe it.

All of this stuff is fake, okay. Look at our ventilators and let’s talk about ventilators and why there would be a shortage of ventilators. Well, this is noninvasive ventilation here. See CPAP or BiPAP. This is a mask that gets strapped on you and we can help you breathe with that. We’re not allowed to use those. Okay? We’re finally opening up to where we can use them a little bit, but for the most part since COVID came out, they said, “Absolutely not, that’s going to cause the virus to spread all over the place by spraying air slaws everywhere and so we can’t use it. You have to let the patient crash and go straight to a ventilator.” Okay. Traditionally that’s not the way we would treat a patient. We also have aerosolized medications, bronchodilators. We’re not allowed to use those either, so everything that we would traditionally do, we’re not allowed to do. Every patient that comes in, no matter what their history, is labeled a COVID under investigation, so if that patient dies, that becomes a COVID death.

Okay, so there’s a lot of weird things going on when it comes to the testing itself. I’ve been looking at this for about a month now, but you can also look for yourself. They were open about it on CBS news the other night. They’re not testing for a virus. Like, if you go … you get sick, you go to the hospital. Traditionally you get tested for flu A and B. Flu A, by the way, is H1N1, the one that killed everybody in 2008. They’ll test you for RSV. Those are actual viruses that they will test you for. This COVID test is different. They’re testing for an RNA sequence from a reaction to the virus and look this up, please look it up. They’re not testing for a virus. There’s not one test that test for a virus. Okay. Then they put it in a PCR, a PCR test, which means it amplifies it.

So, if there’s any little, one little shred of that RNA sequence from a damaged cell in your lungs or in your nasal passage, you’re going to test positive. Now, that can come from cancer, that can come from radiation, that can come from several things. So, and then you hear all this talk on the news about antibody therapy and all this other kind of stuff. People wanting to donate plasma, everything else. But they’re not talking about the virus itself. They’re not testing for the virus itself. And that’s a big, big issue because that makes you say, ‘Well, is this as infectious as they’re telling us it is?” Because if it was infectious is they’re telling us it is, these would all be in use and everybody would be dying and we’re not seeing that, okay. This is unbelievable. Every bit of this has been created, okay.

If you cannot use the noninvasive ventilation and have to go straight to this, the ventilator, that creates a ventilator shortage. But you also want to ask, why is Ford and GM in the business are making ventilators when we have plenty of companies that already make ventilators, what kind of ventilator is it? What does it do? Who’s going to train us on those ventilators and how’s it going to be tested? And then what is the cost per ventilator that the United States is paying Ford and GM for these products, that really aren’t obviously needed.

Sorry. Here’s my PPE that I have to wear, there’s a N95 mask in here and a face shield and of course we got some gowns and stuff, but we’re going … we’re in this for five shifts, minimum before we can get a new one. All right. So, I’m contaminating myself every time I put this in N95 mask and the shield in this bag, it’s contaminating, it’s contaminating over and over and over again and then I’m putting the mask on. Okay, I’m still here, I’m not sick and nobody else is either except with the exception of one or two. If you look at the areas that these people are in, where the hotspots are like such in Georgia’s, Albany and Atlanta, you really have to say, “Well, why are all these places happening in these condensed areas?” Well, I truly believe this is something else that’s causing this.

All of these patients have co-morbidities. They’re all older. The ones that are in life threatening situations and the mortality rate is really not that low. So, if you actually look at what’s going on compared H1N1, H1N1 was a million times more scary than the COVID-19. When it comes to a vaccination, you cannot vaccinate yourself really for a sinus infection. It’s just not going to work. You can’t vaccinate yourself for every little human element that there is, people are going to get sick. What traditionally happens with viruses such as this, if this is a virus and I’m not so sure it is, but you’re going to have a real spike such as in SARS, Zika, H1N1, you got to have a spike and then it’s going to lose its efficacy and it’s going to drop and the mortality rate is going to drop.

I mean, the people that get really sick, it’s going to drop, so you have this initial little bang and then it drops off. That’s what a virus normally does. I’m not completely convinced this is a virus and I’ve been doing this a long time. Do your own homework, do your research. But the equipment should speak for itself. Does this warrant shutting down the country? Does this warrant six to $10 trillion in economic stimulus just for this country? Does this warrant all these things that are being put in place?

I mean, does this warrant the trillions lost? Does this warrant locking everything up? Beaches, hiking trails, tennis courts, bars, restaurants, pool halls, schools. Does this warrant this? I really don’t think it does, not even close. So, y’all need to be asking some really hard questions here in questioning your government and questioning your people in charge, and also questioning your doctors because the doctors believe this stuff just as much as everybody else does, but they’re not looking at the real information, all they’re doing is they’re told something and hey, guess what? They got lives. They got jobs, they got everything else, you got plus some.

So, does that mean Trump’s really in charge of this whole thing? Because, I really don’t think he is. I think he’s being told to do what he’s doing. And that’s the way it is. I mean, this is a deep state Illuminati stuff and this is the real deal. And they’re shutting the world down. Okay, y’all people really need to understand this, the world. Okay. And they’re putting our kids and grandkids and severe debt that will never be paid off. And if you think of how many taxes you’re paying now, can you imagine what our children and our grandchildren are going to have to pay for this scam? So, please look up, do your homework, ask questions, look at our equipment room.

Ask, why can’t we use this if we’re not seeing the infections? Why can’t we use this noninvasive equipment? Why are we having auto manufacturers make ventilators? Who’s testing the ventilators? What kind of ventilator, price per ventilator? All of these things, the economic stimulus package, is this going to be another corporate bailout where they give themselves million dollar bonuses while we starve? I bet you it will be. So, this is real dangerous time we’re coming into when it comes to the vaccination. I promise you. 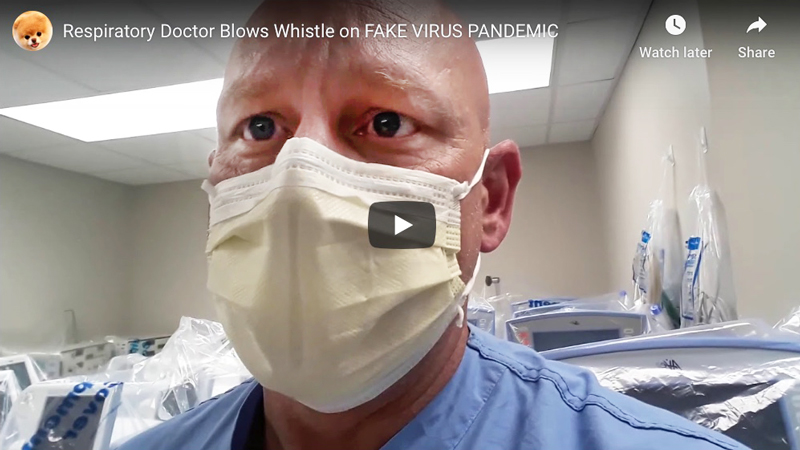